Stark naked, Vanya jumps to his death off a balcony. ‘If you want to jump, jump,’ Pete had told him. Before: a flooded apartment, a toilet in the middle of the room, paranoia. Moby’s ‘Why does my heart feel so bad?’ on in the background. Kislota (Acid), the stylish directorial debut of 26-year-old Russian actor Alexander Gorchilin, begins like a trip and breathlessly continues: Vanya’s funeral is followed by clubbing, drugs and the artist Vasilisk, who asks Sasha if he can photograph his circumcised penis. He may. Sasha becomes the focus of the film. The acid of the title first comes into play in the artist’s studio when Vasilisk dissolves his father’s sculptures in it. Life is not bad in today’s Russia for the young, fatherless men at the centre of the film. They look good, but their lives have no sense of direction. The bottle of acid remains in the room the next morning. It will continue to play a role in the story.
Gorchilin finds powerful images for his depiction of a youth that seem to be losing their grip on life. And neither the cream-coloured interiors of their bourgeois homes, nor rhythmic gymnastics or even the church seem to offer them anything to hold on to.

Born in Moscow, Russia in 1992, he completed his studies at the Moscow Art Theatre School in 2012. He has appeared as an actor in several successful Russian films including Kirill Serebrennikov’s Leto (2018) and The Student (2016). He is a member of the Gogol Center theatre ensemble in Moscow. Kislota (Acid) is his debut feature film as a director. 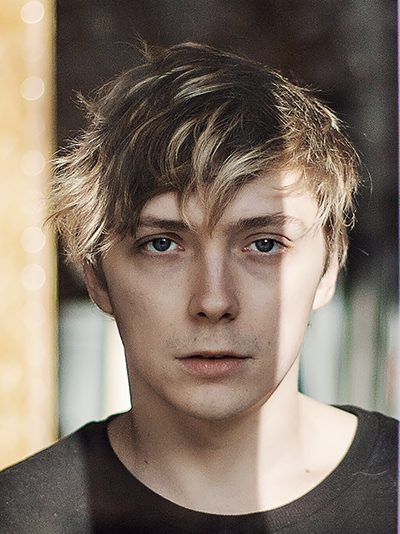