“You say you're a Baul, then behave like a Baul!“ as Indian singer Gaur Khepa, rockstar-like long hair, beard and attitude seemingly at odds with his sacred music, remembers being chastised. Tradition and contemporary practice of Bauls, Bengali mystic minstrels, are explored in Calcutta filmmaker and author Ruchir Joshi's essay film.
Baul music, rooted in Hinduism with elements of Sufism, sings of love, desire and the struggle to find – and stay on – the path to enlightenment. In addition to passing on classical verses of 19th century saint Lalon, Bauls pepper lyrics are with references to modern life such as electricity. In the late 1980s, when Joshi began the film, the West showed increased interested in Baul music, which inevitably impacted the culture, for better or worse.
Joshi foregrounds his filmmaking process and draws upon Western thinkers such as Foucault as he follows Gaur, veteran Subot, new talent Kartik and Mira Mahanta, a rare strong female presence. He captures mesmerizing performances, everyday life and family tragedy. The film often suspends time while heightening perception and critical reflection, perhaps an equivalent to the state Baul music strives to evoke.

Born in Kolkata, India in 1960. He gained a Bachelor of Arts degree and works as a writer, columnist and filmmaker. Tales from Planet Kolkata was digitally restored in 2018, alongside other films of Joshi. 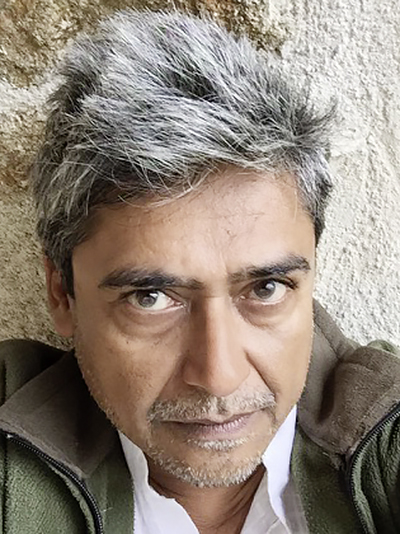