We Live in Silence: Chapters 1-7

Through seven elaborate set-pieces, staged as quasi tableaux vivants, We Live in Silence: Chapters 1-7 articulates a response to Mauritanian filmmaker Med Hondo’s critically acclaimed 1967 drama Soleil Ô, reacting, in particular, to the colonial mindset encapsulated in the following line from the film: “It’s crucial to be able to select individuals capable of speaking as we do, capable of thinking as we do, capable of retaining, of absorbing, yes absorbing words as we do and above all giving them the same meaning, and so there'll soon be millions of white-washed blacks, white-washed and economically enslaved.”
Kudzanai Chiurai dissects Hondo’s film through similitude, staging alternative colonial histories and futures that reject this notion that African migrants are to think, speak, and understand language like their colonizers. By recasting the lead character as a women in the black liberation narrative, the work also repositions the female role in recent histories of struggle and challenges the gender bias inherent to such narratives, which tend to pit a black male as the victim of colonization and, hence, the liberator of the post-colony.

Kudzanai Chiurai was born in 1981 in Harare, Zimbabwe, where he currently lives and works as a multi-media visual artist. His work is focused on tracing the trajectory of political, economic, and social conditions in his homeland from colonialism and independence to the present day. He completed a BA Fine Arts degree from the University of Pretoria (2005) and remained resident in South Africa for several years where he held numerous solo exhibitions. His work has been awarded and shown in major international solo and group exhibitions and screened at film festivals. 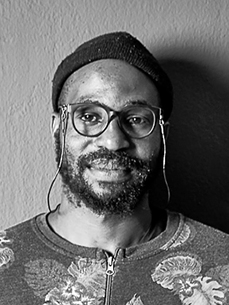