In a Seoul neighbourhood where mostly refugees from the north of the divided country have settled, office worker Cheol-ho lives in poverty with his family – his pregnant wife, his unemployed brother, his mother, who is still traumatised by war, and his sister, a kept woman thanks to the American soldiers. Plagued by toothache, he wanders despondently through the film; it’s others who take the initiative – with tragic consequences.
After Kim Ki-young and Shin Sang-ok, Yu Hyun-mok is considered the third pioneer of post-war South Korean cinema. Influenced by Italian neo-realism, his seventh film Obaltan is seen as a milestone. Made during the brief period of democracy between the overthrow of the dictator Rhee Syng-man and the military coup of General Park Chung-hee, the film was swiftly censored for alleged sympathies with the enemy to the north and then sank into obscurity. The Korean Film Archive had just a single 35-mm print to work with for its brilliant restoration, which has made it possible to rediscover a lost masterpiece.

Born in 1925 in Hwang-hae Province, in what is now North Korea. While studying Korean, he began working as an assistant director. In addition to directing films, from 1963 Yu Hyun-mok also taught at Dongguk University. He took over as director of the Korean Film Archive in 1977, and in 1989, he was elected chairman of the Film Art Society of Korea, and became dean of the Department of Arts at Dongguk University. Yu Hyun-mok made forty-three feature films, and wrote several film history books. He died in 2009. 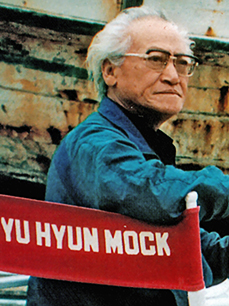