A man is standing on a balcony. Just as he inspects the passers-by on the street, he begins to examine his stream of consciousness. Feeling experimental, he titillates his taste buds with a raw egg, locates his flat on a virtual aerial shot of Oslo, contemplates nature by taking in the view of a mountain range, or transports himself back in an old home video to his teenage self, dreaming of a new identity. Time and again, his thoughts return to his daily life: how does his son experience time? What kind of a life will his daughter lead? Where does his wife feel most at home? What defines his relationship to them, to himself and for that matter to creation itself? After his previous fictional voyage of self-discovery, Mot Naturen, Ole Giæver trains his gaze on his own universe. Blending brutally honest admissions, meditative reflections and a portion of humour he takes us on an expedition to plumb the depths of human existence. Lightness and charm pervade this mixture of animation, photographs, video clips and documentary footage. As he shapes his vision into a cinematic collage, Giæver manages to enthuse us with his curiosity about the world – and shows us our place within it.

Born in Tromsø, Norway in 1977, he studied at the Nordland Kunst- og Filmfagskole in Norway and the Konstfack University College of Arts, Crafts and Design in Stockholm. Both his debut feature film Fjellet (The Mountain) and the subsequent Mot Naturen (Out of Nature) screened in the Panorama programme, the latter being awarded the Europa Cinemas Label. Giæver not only wrote and directed Mot Naturen, he also played the lead character for which he received the Kanon Award for Best Actor. 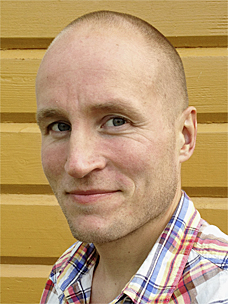