House in the Fields

A remote village in the High Atlas Mountains in Morocco. The winters here are so cold that people barely leave their houses, and the children stop going to school. Beauty returns with the spring, says 16-year-old Khadija, from whose perspective the film is narrated. Her elder sister Fatima is to be married at the end of the summer, and an air of melancholy hangs over this last time they’ll spend together, in the bed they share, while doing housework, out in the fields and in nature.
Khadija likes going to school and dreams of becoming a lawyer – provided the male elders let her! Fatima is supposed to move to Casablanca with her husband. She’s afraid of getting married, of the unknown, and she also wants to work, whatever happens.
Established surroundings and how to extricate oneself from them are at the heart of Tala Hadid’s sensitive portrait of a Berber community whose social fabric and centuries-old traditions are gripped by change. With long, portrait-like takes, precise observations of daily life, and strikingly photographed images of the lush green surroundings and the majestic red of the massif, she manages to bring a faraway world up astonishingly close.

Born in 1974 in London. Hadid studied Visual Art and Philosophy. She then enrolled in the film graduate program at Columbia University in New York. In addition to making films, Tala Hadid works as a photographer. She currently lives in Marrakech, Morocco. 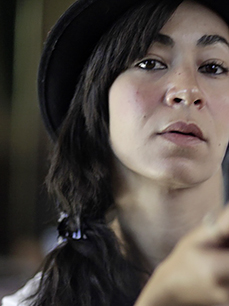