The southern Brazilian plains seem to go on forever, how can such a landscape ever be tamed? You can build roads, put up fences, herd sheep into the enclosures, and keep a watchful eye. But no one can be everywhere at once and they come in at night. The photos recall happier days when this was the new frontier, but people are leaving and the corporations are moving in. They send out their emissaries to buy up the land, their vehicles mark out the boundaries afresh. Dione left the city behind to come here, but now he’s the only one that wants to stay. As his new situation crumbles, he decides to take matters into his own hands and impose a different order on the great expanse. He finds a rifle, chooses his position, takes his aim, and shoots, shattering windows, bursting tires, turning cars into balls of flame. Yet even gunshots hardly break the silence and each act of violence is decoupled from consequence, for the pampa swallows everything. The more Dione tries to keep the landscape in line, the bigger it seems, or maybe it’s just him getting smaller. The southern Brazilian plains seem to go on forever. How can such a landscape be tamed?

Born in 1988 in Porto Alegre, Brazil. In 2008, he graduated with a degree in Film. Since then, he has been a director and producer of films as well as working as a curator and programmer for cinemas. 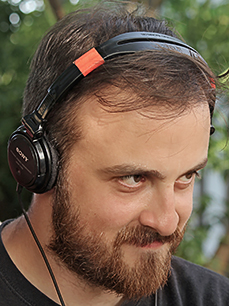