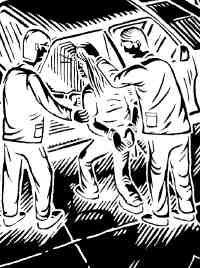 Steve Kurtz is an artist and cultural analyst. Prior to his arrest, he was Associate Professor for Art at the University of Buffalo; he is also a founding member of the internationally acknowledged art and theatre group, "Critical Art Ensemble". Steve Kurtz was preparing an exhibition for the Museum of Contemporary Art in Cleveland when his wife died of heart failure during the night of 11 May, 2004. Kurtz called the emergency services. The paramedics who arrived shortly afterwards believed his studio to be a dangerous laboratory and alarmed the FBI. Agents duly appeared, wearing Hazmat suits to protect them from biochemical weapons, and searched his apartment. They confiscated his computer, his books, his cat and even his wife's body. Kurtz himself was arrested as a suspected 'bioterrorist'. He is still being detained on this charge. He and his colleague of many years' standing, former head of the Genetic Department of Pittsburgh University Dr Robert Ferrell, were both accused of criminal misuse of the public mail system and other channels of communication. Both face sentences of 20 years' imprisonment.
Steve Kurtz is not allowed make any public statements concerning his case. For this reason, director Leeson has made use of actors in order to re-enact his experiences in dramatised scenes. The film also includes documentary material from television current affairs programmes, as well as interviews and testimonies from those involved. Using the case of Steve Kurtz, STRANGE CULTURE makes clear the risks to which critical artists in the USA are exposed since the attacks of 11 September, 2001.