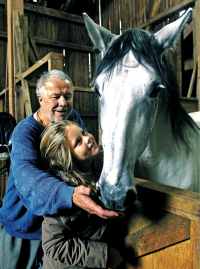 All at once it's there - the largest, wildest and most dangerous horse that ever appeared in the neighbourhood. Alise is desperate because, like everyone else except for Alise, her best friend Rebecca is determined to ride this giant beast. Actually, Alise is the one who really knows everything, ab so lutely everything, about horses. She is the only one who can train them and teach them to leap over even the most difficult of jumps. The only problem is that Alise has made up all of this. In reality she lives in fear of horses with hooves that don't know any better than to kick, bite and hurt her. There was once a time when Alise's granddad was the one who really knew everything about horses. But that was such a long time ago. That was long before he got to be so grumpy and bitter, at a time when he still got a kick out of life and enjoyed having a task in hand. But none of that is important any more because the horse's owner has decided to have the unruly mare put down. Alise has to make the most difficult decision of her life. Will she manage to conquer her fear in order to save Trigger, the horse condemned to death?