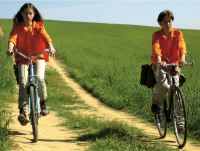 Israel in the seventies. Dvir is twelve and is preparing for his Bar Mitzvah when he realises that his mother is mentally ill. Mother and son live in a Kibbutz in the south. The close-knit community of the Kibbutzim, the strict rules and isolation from the rest of the world have become unbearable for Miri. Dvir looks after his mother as best he can, but he is relieved to learn that his mother's friend, Stephan, is going to pay them a visit. Stephan was once a judo master in Switzerland and is the hero of Dvir's dreams. He has never paid them a visit before. But when Stephan arrives at the Kibbutz Dvir is gobsmacked to discover that this alpine judo champ - the man of his dreams - is around seventy years of age. However, it is not long before Dvir is won over by Stephan's generosity and his polite charm. During his first Shabbat meal with the rest of the Kibbutz, Stephan manages to put the entire community into a light-headed, waltzing mood. In the end, Stephan proposes to Miri. But all is not quite honky dory. Shortly afterwards, Dvir's dog makes Avram's bitch pregnant - although he had made a point of war ning everyone in the Kibbutz to keep their dogs on a lead while his bitch is on heat. Furious, the dairy farmer is now baiting for Dvir's blood. Stephan intervenes, breaking Avram's arm, whereupon the Kibbutzim decides that Stephan must leave. But things go from bad to worse for Dvir.