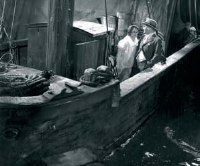 “One Sunday morning / Lies a body, just oozin’ life / Someone’s sneaking ‘round the corner / Tell me, could that someone be Mack the Knife…” On 19 February 1931, DIE 3-GROSCHEN-OPER was premiered with great aplomb in the Atrium Cinema in Berlin. A new print, struck from the original camera negative, has now been released to commemorate the 75th jubilee of this premiere; the current print has the same, virtually square format (1:1.19) of early sound cinema.
The film, “loosely based on Brecht”, and “with Weill’s music”, was shot from 19 September to 15 November 1930 at Efa Studios in Cicero Street in Berlin’s Halensee district and in the Zeppelin Hall in Staaken on the outskirts of the city. Prior to the film’s screening, the public were kept in suspense by a hefty dispute. Brecht and Weill filed suits against the company, Nero Film, for breach of copyright, and the censorship authorities attacked the film for its use of “bordello ballads”, fearing that the rest of the world would come to regard “all Germans as being morally degenerate.”
In 1931, Rudolf Arnheim wrote in the “Weltbühne” that all discussion about the film had been characterised by these legal disputes and that, as a result, “many people were not aware of what a marvellous achievement the film is. The charming sweetness of Kurt Weill’s music; the aristocratic dancer Rudolf Forster, who sports his bowler hat and walking cane as if they were the insignia of his acting profession; the lithesome, gliding camerawork, turning the scene of the narrative into a soundless gyration, lending it a highly successful, fabulous irreality; the playful, dizzying perspectives on barred and ghostly rooms; the frightening staircases and fantastically complex views through windows; the ironic kitsch of the full moon and the mournful love songs; the painterly brashness of the beggar’s shop; the delicate (…) inoffensive grace by which the film ‘coarsens and corrupts’ – one wouldn’t want to miss out on all that!”