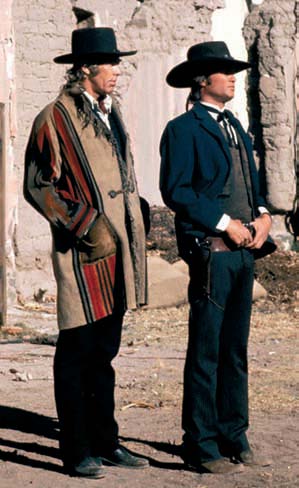 PAT GARRETT AND BILLY THE KID: THE SPECIAL EDITION

Pat Garrett and Billy were once friends. Now one of them is on the side of the law and the other an outlaw. As a sheriff, Pat Garrett has been integrated into the system that Billy hates with all his heart. “It feels like times have changed!” proclaims Pat Garrett at the beginning of the film; “Times maybe. Not me!”, is the Kid’s response. But it’s the landowners who rule things now. And they can bend the rules any way they want. The longer he takes to track down Billy the Kid, the more Pat Garrett begins to understand his erstwhile friend. When the search culminates, the hunter has long since be­come the mirror image of the hunted. And when Pat Garrett finally shoots Billy the Kid, it is an act of self-betrayal tantamount to suicide.
Sam Peckinpah constructed his Western as an epic parable, behind which Nixon’s America was just as visible as was the long-lost era of land-grabbing ranchers. However, it was not so much Peckinpah’s criticism of the hand-in-glove relationship between government and the forces of capitalism that irked MGM. The studio was far more concerned to ensure the quick release of this low-budget film. The film’s notorious problems arose on the very first day of shooting; they ended in a 90-minute version, put together by studio editors, that bombed at the box office. Only when 16 minutes were added to the film, did the work enjoy a modicum of success.