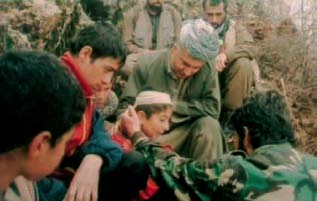 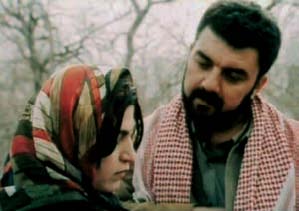 Peshmerga, or “those who face death”, is the term used by Kurds for armed Kurdish forces struggling for an autonomous Kurdistan on the border between Iran and Iraq. The militia was founded in 1976 after the Shah and Saddam Hussein redivided up Kurd territory between themselves. From this point on, the border ran through the middle of Schatt el Arab river. Another paragraph in the contract barred Iran from supporting the Kurds on Iraqi territory. The situation for Kurds deteriorated rapidly following Saddam’s rise to become the most powerful man in Iraq. Persecution and discrimination made it impossible for Kurds to live their lives in peace. The situation became even more acute following the expulsion of the Shah and the establishment of the Ayatollah regime in Iran. The Kurds were persecuted in equal measure by Iran, Iraq and Turkey.
The traditional Kurdish uniform of baggy felt trousers, soft yellow sashes and a distinctive kufya or scarf worn wound around the head, made the Peshmerga a symbol of Kurdish opposition, and before long activists in other groups such as the PKK, PUK and KDP were affiliating themselves with these fighters, although these groups had nothing to do with the founders of this oppositional force. The filmmakers: “While fighting Saddam’s dictatorship the Peshmerga never lost their hope of attaining freedom. During their struggle, which is their only way of surviving, they never once deserted their deep-seated conviction that war is no solution and that the future can only be found through peace and democracy.”