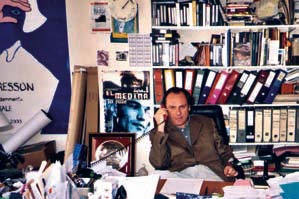 Humbert Balsan (1954–2005), was a film producer; he was also Vice-President of the Board of Directors of the Cinémathèque Française and the European Film Award. In 2003 he was a member of the International Jury at the Berlin International Film Festival. Balsan, who began his career as an actor, produced over 60 films in 25 years; he ‘discovered’ numerous French filmmakers and helped to foster their careers. Anne Andreu: “Humbert Balsan chose a career path that led, obliquely, to the beaten track. This portrait sketches the trajectory of a man, who was not contented to have just the one life. Humbert wanted to have a grand life, in which he alone could call all the shots.”