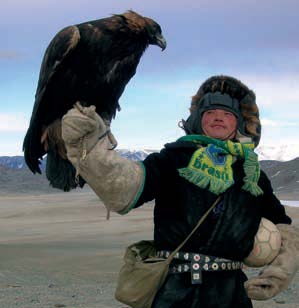 How is it possible that children living in the remotest part of the Mongolian steppes know who Ronaldo is?
This film tells the adventurous story of three heroes, none of whom have ever met, but who nevertheless have two things in common: firstly, they all live in the farthest-flung corners of the planet and, secondly, they are all three determined to see on TV the final in Japan of the 2002 World Cup between Germany and Brazil. The protagonists in this ‘global’ comedy are: a family of Mongolian nomads, a camel caravan of Tuareg in the Sahara, and a group of Indios in the Amazon. They all live about 500 kilometres away from the next town – and the next television – making their task a particularly daunting one. Nevertheless, these inventive people possess the resourcefulness and the willpower to achieve their goal.
In a world where virtually instantaneous access to information seems to have become something most take for granted, it is nothing out-of-the-ordinary for us to view many world events in real time from the comfort of our own couch. What goes on, however, in the far-flung corners of our earth? Do the people who live in these places live their lives devoid of any kind of information? Just how do they gain access to current affairs? What is important to the heroes of this film, and why is it important to them? Who has heard of Ronaldo and who hasn’t? Why are the Tuareg Oliver Kahn supporters?
Is there a world beyond global football fever? What has the battle of Stalingrad got to do with defence tactics in German football? Where does loyalty to one’s country and its people begin, and where does it end? Set against the backdrop of a series of stunning landscapes, these are just some of the fundamental questions asked in this unique, humorous adventure.