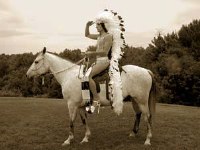 The film is based on the condescending depiction of “romantic savages” to be found in the diaries of “American Indian” painters George Catlin (1796–
1872) and Paul Kane (1810–1871). These artists are foiled with great relish by Miss Chief Testickle (Kent Monkman’s alter ego), who abuses naked white men as dressing up dolls. Having first made them drunk, she seduces them and then dresses them up as “authentic” examples of the European male.