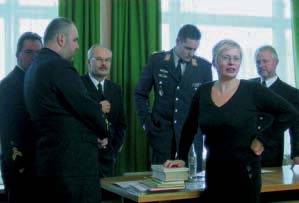 Every family has a secret. Theirs lies in a country that no longer exists. A country behind a wall from whence they were “bought out” by the West Germans. Just as the old border between East and West Germany is only visible on old maps, looking at these people you wouldn’t know that they were all once imprisoned as “enemies of the state” under the GDR regime and later “redeemed” by the Federal Republic. And yet, for these people, the past is still present, in the midst of modern-day Germany. Not only has the past left traces in their country, it continues to have a deep effect on the people around them.
Once branded enemies of the state because of their refusal to remain silent, these people are now afraid to answer their children’s questions. This film portrays three families in search of the right way to come to terms with their personal history in the GDR.
Anne, Utz, Matthias and Tine were all the same age as their own children are now when they received their heavy prison sentences. All of them vacil­-
late between their fear of communicating and their desire to unburden themselves. It’s a risky business and nobody feels inclined to open up old wounds.
Anne was a young mother when the GDR pronounced her a “dangerous enemy to the state”. Her subsequent enforced separation from her 18-month-old son was to have a lasting traumatic effect – it still upsets even her own parents.
Utz came to the attention of the Stasi while he was still a schoolboy. No­wa­days he talks to other people’s children about his past. But his own daugh­ters are afraid that their questions could hurt him – and themselves.
Matthias and Tine were arrested at the same time. Today, they are coming to terms with their experiences together. They have even begun to confront those who betrayed them at the time – a move that their children don’t always find easy to accept. Matthias himself is still unable to talk to his own father about his involvement with the Stasi.