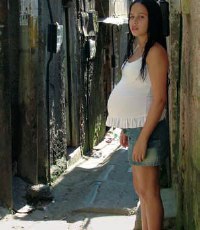 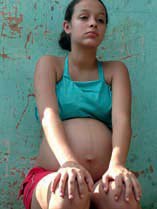 On her 13th birthday Evelin realises that she is pregnant. The child’s father is her 22-year-old boyfriend who has recently stopped working for dealers in Rocinha, Rio de Janeiro’s largest favela. Evelin is surprised to learn that he is looking forward to becoming a father – she had expected a different reaction from him.
Luana, 15, never once contemplated having an abortion when she found out that she was pregnant. Her father died when she was very young and she has been living with her four younger sisters and her mother in a household of women. As a young girl she was obliged to help her mother raise the younger children. Of late, she’s often pondered what it would be like to have a child that “belongs to her alone.”
Edilene did not plan her pregnancy but did nothing to avoid getting pregnant. The same applies to her mother and so, mother and daughter now find themselves pregnant at the same time. Edilene is expecting a son from Alex, with whom she is very much in love. But Alex is a womaniser, and 15-year-old Joice is also expecting a child from him. Naturally, this love triangle is a real drama for Edilene, who is just 14.
Director Sandra Werneck has spent three years capturing on camera the everyday lives of these three young girls.