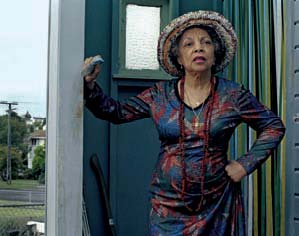 A family reunion suffused with the charm of Oceania is the focus of this directorial debut which New Zealand dramatist Toa Fraser has adapted from his own one-person play, “No. 2”, in order to create a vibrant and multi-voiced ensemble piece. At the centre of the film is Nanna Maria, an ageing Fijian matriarch, who lives on a suburban estate in Auckland.
Nanna has just been woken up by a dream she has had about a big family wedding she attended as a child many, many years ago. The memory of this wedding begins to give her an idea. She decides to have a party. A big one. Today! The event she has in mind is a get-together like the ones they had in the old days, with plenty of singing and dancing and laughter – and even an argument, if you will. There has to be red wine and old wooden furniture, white tablecloths, and a pig cooked on an open fire. But there must be no party-poopers among the guests. And no outsiders! Not even her useless children may attend. Today she intends to name one of her grandchildren as her successor at the head of the family.
The old lady rounds them all up: her grandson Erasmus and his cousin Charlene, who lives with her son Moses and Nanna Maria at “No. 2”. The relatives pour in from all over the city. Among them is flamboyant cousin Hibiscus and her boyfriend Shelley, who Nanna Maria doesn’t consider an outsider. A distant cousin, Pule, even brings along a live pig to be barbecued. Nanna’s favourite grandson Tyson has another surprise in store: he brings his European girlfriend, “Danish Maria”, with him. No sooner do the two women meet than Nanna Maria promptly forgets her own ruling about outsiders and invites the young woman to the family celebration. There is wine. There are songs. There is laughter and dance. And before long, even the obligatory argument comes to pass…