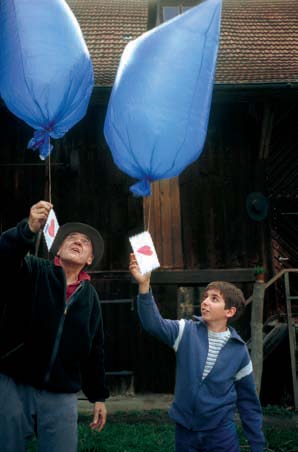 As in his previous film, VOLLMOND, Swiss writer and director Fredi M. Murer once again takes a look in his latest work at the very different ways in which adults and children experience the world around them. But whilst VOLLMOND described a dozen adolescents eluding their legal guardians and taking their education into their own hands, this time a lone fighter is at the centre of events.
Vitus, who is six years of age, is a very unusual boy. He has hearing like a bat, plays piano like the young Mozart and reads the encyclopaedia at kindergarten. No wonder that his parents – his mother is a translator at a Zurich publishing house and his father an acoustics engineer working for the company, “Phonaxis” – sense that a brilliant career lies ahead for their boy, who, they have decided, is to become a pianist.
As for the little genius himself, he prefers to spend his time tinkering in his idiosyncratic grandfather’s joiner’s workshop, and dreaming of flying. He wants nothing more than to live a normal childhood. Vitus’ increasingly lonely wunderkind existence pressurises him to such an extent that, at 12, he decides there is only one way out of his predicament: he leaps from the balcony on grandfather’s hang glider. When Vitus comes out of his coma in hospital, his genius has disappeared into thin air. Now, at last, he is free to live his young life – a life that turns out to be a double life, in the true sense of the term, and soon sets some rather remarkable developments in motion. And even sends shock waves through the stock markets.