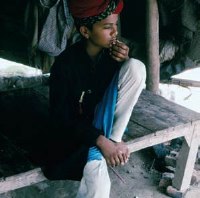 Swaroop, who is 14, comes from an old family of traditional Sufi musicians. One day, he leaves the remote little town in the desert where he has grown up in order to accompany his uncle on tour. Uncle Nizam is a difficult character. He smokes opium and is not beyond indulging in a bit of thieving and swindling. Swaroop and his uncle are appearing together with other relatives on their musical tour across India. But Swaroop’s uncle’s egocentric and unreliable personality, coupled with his unbearable religious zeal soon lead to arguments and, finally, his separation from the rest of the group.
Swaroop continues the tour on his own, trying as best he can to get used to life as a travelling musician. In one town he meets Santosh, a young Hindu who hopes to become a priest. The two become friends and Santosh decides to join Swaroop and become a musician himself. Before long, the boys find themselves in a confusing world of shopping malls and markets, among people of all kinds of cultural backgrounds and nationalities. How will Swaroop cope in an environment that has almost nothing to do with the traditional world in which he was raised? Swaroop finds the answer to such questions in his music.
Filmed in a style closely allied to neorealism, this film features Sufi musicians from Rajasthan in the leading roles.