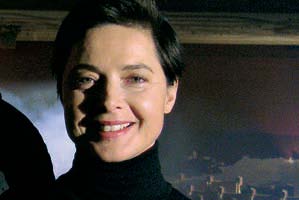 This unique collaboration between actor Isabella Rossellini and avant-garde filmmaker Guy Maddin celebrates the life and work of the actor’s father, director Roberto Rossellini, who would have been 100 years old this year. In a bold tour de force Isabella Rossellini appears not only in the role of her father and her mother, Ingrid Bergman, she also plays a number of other iconic figures in cinema history including Fellini, Hitchcock, Chaplin and legendary producer David O. Selznick. Guy Maddin: “Roberto Rossellini failed in his bid to save the world with cinema. But perhaps he succeeded in saving cinema for the world.”