The Devil And Daniel Johnston 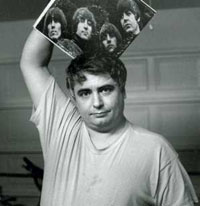 THE DEVIL AND DANIEL JOHNSTON

According to Kurt Cobain, Daniel Johnston was the greatest songwriter on earth and, as far as the music industry is concerned, he has remained an enigma to this day. Johnston wrote sad songs that spoke of deep-seated isolation and loneliness. They were responsible for injecting more honesty into pop during the mid-1990s.
Daniel Johnston is both a genius and a legend. His is a tragic story: brought up in a Christian-fundamentalist environment in West Virginia, he has suffered from manic-depression and schizophrenia since childhood. His mental trials find expression in his art, which, for him, has become his therapy. His ostensibly child-like view of the world that appears in his drawings and paintings have inspired a wide variety of musicians, from Sonic Youth to Nirvana.
Like former Beach Boy Brian Wilson, who shunned audiences and the media for years, Daniel Johnston also often turned his back on the limelight (albeit not always voluntarily), which meant that his rare, legendary live appearances – such as at the “Volksbühne” in Berlin in 1999 or his gig at the Knitting Factory in New York in the year 2000 – were greeted with particularly frenzied enthusiasm.
In his film, Jeff Feuerzeig uses a mixture of rare archive footage, interviews with fellow-travellers and admirers, as well as numerous songs written and performed by “Desperate Dan” himself in order to reconstruct the life of an artist tortured by his own demons.