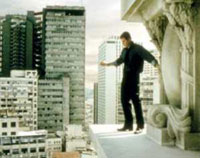 During the course of his research into a scandal in the construction industry, journalist Célio Rocha runs into an old schoolfriend. Otávio Sabóia is the sole heir of a bankrupt building contractor named ‘Dr’ Sabóia, who has recently committed suicide. This property speculator was the man once responsible for dashing the hopes of a large proportion of Brazil’s middle-class of owning a home of their own. Célios parents were among those whose dreams were turned into a nightmare.
Barra da Tijuca was the name of the district in Rio de Janeiro that famous ‘engineer’ Dr Sabóia planned to transform into a kind of ‘promised land’ by putting the “Paradise Condo” on the market – one of which Célio’s parents had purchased. But Célio’s parents never did move into apartment 808. In spite of the fact that they and many others had paid out a great deal of money, the entire building project was never completed.
Fifteen years on, the inhabitants of a neighbouring shanty town decide to take things in hand. They move into the apartments as squatters, and, peacefully claiming ownership of the buildings they now believe to be theirs, they apply to the court for the right to make use of the entire estate – including apartment 808.
At this point, Otávio, the building contractor’s heir intervenes, demanding from the squatters no less than to sell their souls to the devil! Célio even agrees to act as bait, but, when the gaff is blown, he finds himself bear-
ing the brunt of these people’s anger. Célio’s guilty conscience prompts him to set off in search of God and, to his great surprise, he actually finds him!
Perhaps he will even find redemption at the end of his tortuous path. All he has to do is persuade Otávio to give away his entire fortune to the poor. It won’t be easy of course – but God is bound to give him a little help.