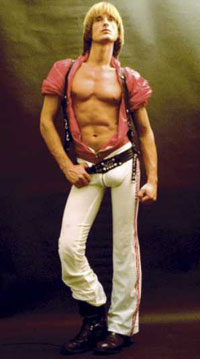 Known as “the Greta Garbo of gay porn cinema”, legendary Californian photographer, filmmaker and self-made man Peter Berlin is regarded by his fans as a male sex icon. He achieved fame – and notoriety – in the early 1970s when he made two wild 16mm films – NIGHTS IN BLACK LEATHER and THAT BOY. Almost overnight, Berlin had conquered both the hearts and fantasies of gay men all over the world.
Behind the public figure and the obvious pseudonym lies a fascinating biography. This documentary uses interviews, photographs and film excerpts to reconstruct the life of Armin. Born into an impoverished aristocratic family in post-war Berlin, Armin was aware of the power of his good looks from an early age. Deciding to set off for the big, wide world in his mid-twenties, his globetrotting soon brought him into contact with likes of Andy Warhol and Robert Mapplethorpe and later brought him stardom.
At the beginning of the 1970s Armin arrived in San Francisco where he took on the name Peter Berlin and began working as a filmmaker, photographer and model. He may have long since disappeared from the limelight, but Berlin has outlived most of his old friends. Far from forgotten, Peter Berlin still has his dedicated fans, including John Waters, Armistead Maupin and many others.