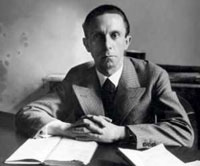 Joseph Goebbels (1897-1945) has survived the Nazi regime as a trade mark. Nowadays, the name Goebbels stands for unbridled, cynical and – at least partially – successful propaganda. Comparisons with Goebbels are made at regular intervals as a means of branding certain politicians as evil rabble-rousers and polemicists.
However, Joseph Goebbels’ life was more enigmatic and unsettling than his current classification as propaganda genius or “inveterate liar of the Third Reich” would suggest. Lutz Hachmeister and Michael Kloft’s film shows how Goebbels was constantly stage-managing his life and reinventing himself, from his beginnings as a “National Socialist” to his suicide with his wife and children. Suggesting to audiences that Goebbels’ career was not unlike that of a modern politician in the eye of the media; this documentary is unusual in that it abstains from the use of commentary – Goebbels’ own diaries (that he kept continually from 1924 to 1945 and in which he wrote excessively) being the only “voice” in the film. In this way, a psychological portrait emerges of a man who lived at fever-pitch, vacillating between weltschmerz, whininess, destructive anger and political ecstasy. His was an experiment in stylisation and manipulation that he not only conducted with the public, but also with himself. In this way, this perpetrator was his own first victim.
Goebbels was a cinematic and theatrical character unlike almost any politician or agitator before him. In particular, the film succeeds in conveying the gestures and facial expressions of this manic-depressive man, creating the picture of a modern media manager who devoted his workaholicism to the whole spectrum of communications – only to fail so completely on political and moral terms.
Production company press release