Who Is Helene Schwarz? 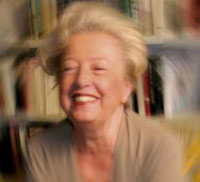 WHO IS HELENE SCHWARZ?

Who is Helene Schwarz? Only the chosen few know this woman who started working as a secretary for the German Film and Television Academy (DFFB) on 13 February, 1966 and who today, at the age of 78, still acts as counsellor and muse to many people.
The path of Helen’s career is paved with famous names – including that of Wolfgang Petersen, Holger Meins (who later became a member of the Red Army Faction) as well as directors Wolfgang Becker, Detlev Buck and Christian Petzold. All have fond memories of forgetting their troubles after having poured their hearts out over a cup of coffee in Helene’s office – for Helene was both friend and advisor to countless film students.
What makes Helene so special is her warmth, which never fails to cast a spell over anyone who meets her – including myself. Although my own film school application was turned down at the end of the 1960s (along with that of Werner Schroeter and Rainer Werner Fassbinder), I nevertheless remained loyal to Helene. I have even been accepted into her illustrious skat club, where Helene never fails to astound me with her amazing memory and her vast treasury of anecdotes, as well as all the latest film industry gossip.