Feb 17, 2021
The Stage is Set for the 2021 European Film Market: The Comprehensive Conference and Film Programme is Going Online 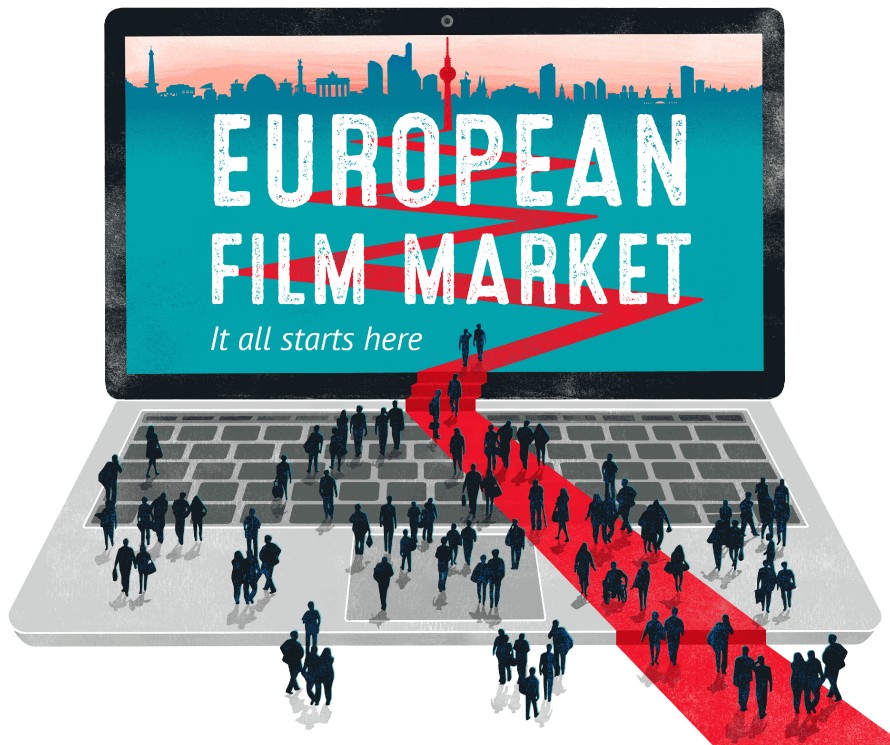 The EFM’s 2021 visual combines the Berlin feeling with the online universe.

On February 17, the European Film Market is rolling out the red carpet for the international film industry. Starting now, people with an Online Market Badge can log in at www.efm-berlinale.de and access the new, expanded and optimised applications. At the same time, the EFM will present the key visual for this year’s online edition, in which illustrator Irmela Schautz has created a visual connection between the diverse film industry and the EFM online services, and placed it in the context of its origin: Berlin.

The comprehensive conference programme, with more than 90 individual events in the “EFM Industry Sessions”, will be made public today as well. It is complemented by selected events of the Berlinale Co-Production Market, Berlinale Talents, World Cinema Fund, individual Berlinale sections, and associated events from partners and exhibitors. Numerous live streams can be retrieved on demand after the event.

There will also be a focus on the virtual presence of exhibitors, and the offering of films and series in Market Screenings. The exact times and authorisations for access will be published on February 22.

Market Screenings and the EFM conference programme run from March 1 to 5, 2021.

Currently, 780 films are already registered for market screenings, of which two thirds are market premieres. Over 470 companies from almost 60 countries have registered, including almost 200 companies who are participating in the EFM for the first time. The number of accreditations is also closing in on last year’s high level of participation. “These positive numbers confirm that this year’s virtual edition of the EFM is also in high demand, and they reinforce the decision to go forward with the unusual format in an unusual year. In the first quarter of the year, the EFM is the focal point of the international film business,” comments EFM Director Dennis Ruh.

At the “EFM Industry Sessions”, industry professionals can look forward to a comprehensive, five-day conference programme with around 90 talks, seminars, round tables, pitches, podcasts, presentations, keynotes, workshops, think tanks, masterclasses and showcases with internationally renowned speakers. The programme will be supplemented with networking and well-being offerings for the purpose of taking a breather, as well as the virtual Berlinale kindergarten, which will be provided by the initiative “Parenting at Film Festivals”. The “EFM Industry Sessions” are supported by Medienboard Berlin-Brandenburg.

The thematic focal points in this edition are the digitalisation of the film and media business, social sustainability, and diversity and inclusion in the film industry. These areas will be discussed from different perspectives in think tanks and seminars, and the results will be presented at the closing event.

The “EFM Industry Sessions” will be officially opened on March 1 at 4 pm CET by EFM Director Dennis Ruh, moderated by Annabelle Mandeng. The kickoff event will take a look at the status quo in the industry, and introduce the conference week subjects.

The “EFM Industry Sessions” will offer daily short formats: The “EFM Daily” will provide a summary of the results of previous sessions, and a look at upcoming formats. At the start of every day, the “EFM Morning Brief” will provide a compact update on market happenings and programme highlights. The short daily episodes are part of the newly introduced EFM podcast “Industry Insights”, which, in cooperation with the Goethe Institut, offers exciting, engrossing conversations on forward-looking industry topics. In addition to the four episodes that will be presented during the EFM, eight more episodes will be published throughout the rest of the year. Furthermore, the EFM’s “Revive” section will offer a daily yoga break, film music and a workshop on developing creative rituals for inspiration and little time-outs from the digital programme.

As part of EFM Startups, ten selected innovative international entrepreneurs will have the opportunity to present their newest ideas, services and tools for film and media production. An overview of possibilities and advantages in virtual production will also be available in a separate event, followed by a European case study in cooperation with Explorer X.

For the second time, the EFM will look at different aspects of working with archives on Archive Day, including a talk on the newest approaches to working with audiovisual archives, moderated by Elizabeth Klinck, one of the most well-known archive researchers and producers worldwide.

After pre-registration (which already opened), market participants can get together at Roundtables with experts from the areas of world sales and distribution, financing, funding and (co-)production, and consult on projects. Using case studies, film commissioners will present practical examples of how they can support producers with film projects whose work was interrupted due to the pandemic.

One discussion format will look at the question of who sets - and is allowed to set - the framework for cinematic narration. This format pertains primarily to the perspectives and stories of marginalised groups. A Spotlight Session hosted by the International Emerging Film Talent Association (IEFTA) will focus on the growing film business in Portuguese-speaking African countries.

The Sino-European Film Forum, in cooperation with the initiative Bridging the Dragon, will take a look at Asia. A webinar will give insight into documentary production in China, and include a keynote on the TV and streaming landscape in the “Middle Kingdom”.

The programme will be rounded off by various digital networking formats.

Accreditations for the Online Market Badge allowing participation in the programmes are still available at www.efm-berlinale.de until the EFM closing on March 5.