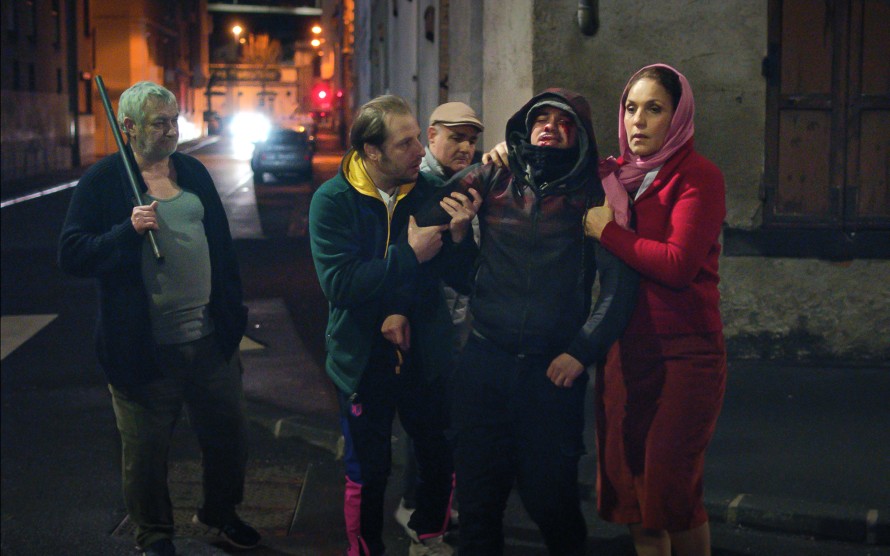 A renowned auteur of European cinema is launching the 2022 Panorama: Alain Guiraudie will open the section with his political satire Viens je t’emmène (Nobody’s Hero), his first film to be presented at the Berlinale. Guiraudie’s love-struck band of middle-class citizens race through the streets of Clermont-Ferrand following a terrorist attack. Love, paranoia and distrust propel his cast of characters through this satire which, in spite of all its social criticism, is full of empathy for its flawed heroines and heroes.

Some directors in this year’s programme tackle social turmoil with visual verve and an appetite for dramatic gestures, setting a clear example for combative genre cinema that turns social codes upside down.

Fields of vision and sightlines become harbingers of upheaval when Mexican director Alejandra Márquez Abella depicts the decline in power of the elite in her epic third feature film, El norte sobre el vacío (Northern Skies Over Empty Space). In her debut Fogaréu, Brazilian filmmaker Flávia Neves combines family horror with the history of colonialism and slavery in a surreal and virtuoso manner. In Una femmina (Una Femmina – The Code of Silence), Francesco Costabile reveals with dramatic intensity a young woman’s process of emancipation in the midst of a family entangled in dark machinations. The camera’s gaze anticipates the confrontation and duel for power that is imposed with brute force.

Director Isabelle Stever opens up perspectives that uncompromisingly smash into a thousand pieces the traditional family drama and its fossilised conventions. Grand Jeté invites us to witness the blossoming desire between a mother and her estranged son. Steeped in unparalleled physical intensity, the film challenges our viewing habits and moral assumptions with relentless persistence and a masterful mis-en-scène.

Produkty 24 (Convenience Store) by Uzbek director Michael Borodin and Baqyt (Happiness) by Askar Uzabayev from Kazakhstan peer into the depths of social and family structures of violence. Both filmmakers deliver enormously important, fictional contributions about modern slavery in Russia and domestic violence against women, which is tragically the order of the day, and not just in Kazakhstan.

Ten documentary works enrich this year’s programme with their stories and heterogeneous points of view. Many of them combine history and the present to open up new perspectives, make biographies visible and bring previously hidden subcultures to life. In Cem Kaya’s documentary essay Aşk, Mark ve Ölüm (Love, Deutschmarks and Death), the director orchestrates material from 60 years of alternative German post-war and Turkish-German cultural history. Berlin singer-songwriter Bettina Wegner is the focal point of the film portrait Bettina in which Lutz Pehnert deploys meticulously researched and arranged archive material to tell not only the biography of an artist, but also the history of the divided Germany.

In New York’s legendary Chelsea Hotel, we meet such illustrious residents as the inquisitive choreographer Merle and the eccentric, hermit-like photographer Bettina. They represent two of those who decided to stay on despite major refurbishment and who are insisting on their right of residence. In Dreaming Walls, Amélie van Elmbt and Maya Duverdier create a kaleidoscopic portrait of the resisters and the spaces they inhabit and roam.

The camera as a tool for self-reflection and a way to search for clues is a recurring motif in films such as No U-Turn from Nigeria, in which we set off with director Ike Nnaebue on a cinematic journey retracing his steps from Lagos to Tangier, the continent-traversing route he first travelled as a teenager in hope of a better life. Along the way, he draws a multinational and multilingual portrait of African migration. In No Simple Way Home by Akuol de Mabior from South Sudan, the director confronts her own family history, which is closely linked to the history of the young East African state. And in Nous, étudiants ! (We, Students !), Rafiki Fariala also poses questions about a better future, this time in the Central African Republic. His camera accompanies him and his loyal clique in a wide variety of situations and visualises the poetic plea of a forward-looking generation. Both countries are being represented with a film at the Berlinale for the first time.

The 2022 Panorama offers a wild ride through contemporary cinema with works that denounce corrupt elites, dissect hardened and toxic family structures and lead us to places of resistance and reconciliation. The films mediate between past and present and look at the interplay between the individual and society. They demonstrate an aesthetic desire to create, a delight in dramatic gestures and a satirical sensibility. Simultaneously disarming, cruel, humorous and loving, they are one thing above all else: made for the big screen.

The films of the programme can be found below.
The films that were already announced can be found in the press release from December 15, 2021.

Cem Kaya’s dense documentary essay celebrates 60 years of Turkish music in Germany. An alternative post-war history that is at the same time a musical Who’s Who – from Yüksel Özkasap to Derdiyoklar and Muhabbet.

For her job as an influencer, she wears orange and a broad smile. The “Happiness” brand is her doctrine, but her home is a dark place where brute force has ruled for years. This film shows us what it costs to escape the trap of misogyny.

Balli, 14, is an outsider. But then he meets three boys of his own age. A coming-of-age drama which finds poetic images for a tentative, emergent friendship that threatens to falter due to gender-normed codes of conduct, and violence.

A biography set in East and West Berlin in which singer-songwriter Bettina Wegner, born in 1947, sings about life in the GDR, her feelings of being uprooted in West Berlin, and looks back with humour and honesty on a life of resistance.

Amaia and Javi are new parents. When he disappears for weeks on end to work, she seeks support from her parents. But Amaia’s mother suddenly falls ill. A sensitive study of the caring, cross-generational role of women.

Ben and Raz are painstakingly pursuing their desire to have a child, and the migrant neighbourhood where this gay couple has set up their new flat is on the up. But a conflict over a newly planted tree in the city brings deep-seated prejudices to light.

Hardship and beauty lie cheek by jowl in Rosa’s home in the wilds of Calabria. When she becomes aware of her family’s involvement in the mafia, she has to decide how far she is willing to go in order to break out of the ’Ndrangheta.

After years of absence, Fernanda returns to her uncle’s ranch in Goiás in mid-western Brazil. Her appearance and her uncomfortable questions expose ableist and colonial structures and shake the façade of her bourgeois family.

Dance teacher and mother Nadja left her son Mario with her own mother when he was little. Now she has reappeared on his doorstep, seeking a closeness that knows fewer and fewer boundaries. An uncompromising film about family relationships.

Lidija is working for a dubious real estate company. It is her job to protect the construction site’s image and cover up the dirty tracks left by Serbian turbo-capitalism. But when the workers rebel, her complicity is put to the test.

When a villager is injured by a car at a party, firefighter Bronya is immediately convinced that it is an attack perpetrated by an “Arab”. His colleague Standa sees things differently. A laconic film that explores the causes of racism.

Akuol de Mabior is the daughter of a martyr of the revolution in South Sudan. As her mother is sworn in as vice president, the young woman tries to find out if this country torn by civil war can ever become her home.

As a young man, Ike Nnaebue tried to flee to Europe. Twenty years later, he retraces the steps of his journey back then to find out what motivates young people today to expose themselves to the dangers of a passage into an uncertain future.

With a keen sense of how to deploy omens that herald change, Alejandra Márquez Abella portrays a period of epochal change in rural Mexico – as seen by those who are usually restricted to the role of passive supporting actor.

A supermarket in a Moscow suburb is the heart of darkness for the Uzbek “employees” who work there around the clock and are threatened, abused and imprisoned. Mukhabbat escapes and reveals the vicious circle of modern slavery. A truly surreal real-life trip.

After a terrorist attack in Clermont-Ferrand, France, events are driven forward by an unusual cast of characters centring round a likeable man in his mid-thirties, an older married female sex worker and a young homeless man of Arab descent.