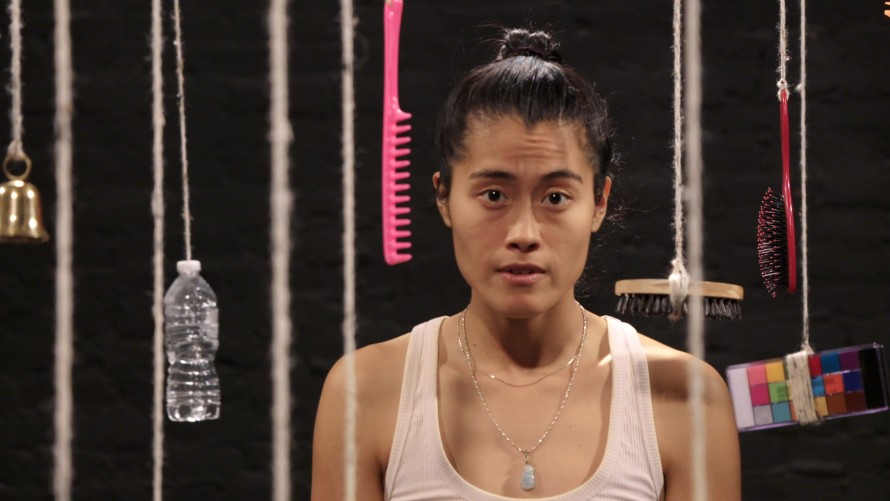 One Big Bag by Every Ocean Hughes

Moving closer to the ground, getting to the bottom of things, looking and hearing with precision, perceiving what’s happening close by, oft-unnoticed: these are the ideas that inform the 17th edition of Forum Expanded and the selection of films, installations and performances that will be presented as part of the Berlinale at the Arsenal cinema, silent green Kulturquartier, the Embassy of Canada, SAVVY Contemporary as well as at the Zeiss-Großplanetarium for the very first time.

In his film Kumbuka, Petna Ndaliko Katondolo once again grapples with the legacy of colonial images: two Congolese filmmakers attempt to reedit a Dutch documentary in which they appear as protagonists and that they believe represents them in distorted fashion and from a Eurocentric perspective. Ndaliko Katondolo makes use of this true story for a broader examination of cinematic representational tropes of the African continent. The way in which colonial, racist stereotypes become inscribed into image-creating technologies themselves is explored by Musquiqui Chihying in his installation The Lighting, which draws on both digital and analogue media. Alongside Kodak film from the 1970s and the exposure characteristics of digital photo cameras, the installation is also about a skin brightening algorithm that enjoys huge popularity as a mobile phone app in Africa.

The lasting effects of political and economic postulations — and not just colonial ones — also correspond to the engagement with radioactivity in both metaphorical and practical terms. Through the Wismut AG, Alex Gerbaulet and Mareike Bernien examine a piece of German nuclear history in Sonne Unter Tage, retracing at the same time a political history of the divided Germany based on the uranium deposits found in Thuringia and Saxony. And traces of uranium mining can be found in the Canadian provinces too, alongside holy cows and adolescent zombies, in the essay film Surface Rites by Parastoo Anoushahpour, Faraz Anoushahpour and Ryan Ferko.

Half-lives beyond the capacity of human imagination conjure up images of possible futures. Filmmaker and performer Liz Rosenfeld does this in 360° in White Sands Crystal Foxes: at the Zeiss-Großplanetarium in Prenzlauer Berg, she will be showing a futuristic queer fantasy as a dome projection which is set at a time in which foxes are the only species still capable of reproduction and crystals bursting with energy are obtained from human secretions. A performative reading by the artist expands the film screening.

The working life of an end-of-life doula — a woman whose profession it is to prepare dead people for their last journey — is the subject of the performative film One Big Bag by Every Ocean Hughes. In Majmouan (Subtotals), Mohammadreza Farzad asks himself and us the question of how a life can be narrated in numbers. Grief and forced absences are also a central motif in other works — the ongoing pandemic has left its mark. It is also reflected in decentralised production contexts and cinematic collaborations via social media and Zoom. The conversation in and about three languages held in If from Every Tongue It Drips (Sharlene Bamboat) is conducted between Sri Lanka, Canada and Scotland, while for Diva, French artist Nicolas Cilins makes contact with a Vietnamese social media star via fan letter. Just two examples of working against geographical borders and those forged by the pandemic.

The group exhibition at the Betonhalle of silent green Kulturquartier features installations by Abdi Osman and Siska in addition to the piece by Musquiqui Chihying and the works selected for the 2021 Forum Expanded.

The video work VCR’s Choice by Charlton Diaz is showing at the Marshall McLuhan Salon of the Embassy of Canada and carries out a process of queer media archaeology via obsolete VHS technology.

SAVVY Contemporary presents the exhibition The Wind in Your Body Is Only Visiting, Your Breath Will Soon Be Thunder by artist Pallavi Paul as part of Forum Expanded.

Home When You Return
USA
by Carl Elsaesser
International premiere

Sol in the Dark
France
by Mawena Yehouessi
World premiere

Screening and performance at Zeiss-Großplanetarium

Onder het witte masker: de film die Haesaerts had kunnen maken (Under the White Mask: The Film That Haesaerts Could Have Made)
Belgium
by Matthias De Groof

The Song of the Shirt
Germany
by Kerstin Schroedinger
World premiere

Exhibition at Marshall McLuhan Salon of the Embassy of Canada

The Wind in Your Body Is Only Visiting, Your Breath Will Soon Be Thunder
India / Germany
by Pallavi Paul
World premiere