Mar 03, 2021
Projects on the Road to Success: Three Awards and 1,300 Meetings at the Berlinale Co-Production Market 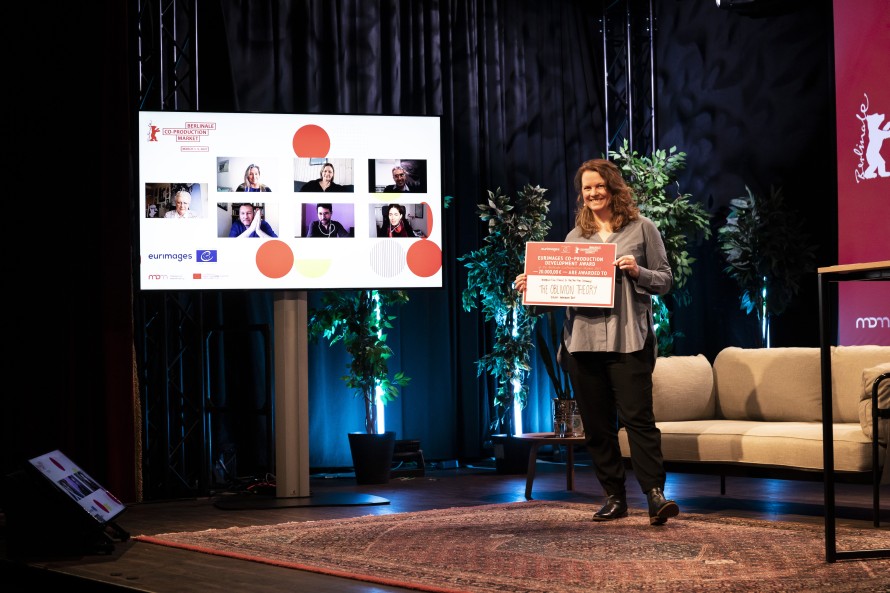 The Eurimages Co-Production Development Award, endowed with 20,000 Euros, went to the project The Oblivion Theory (director: Annemarie Jacir), presented by producers from the companies Incognito Films from France, and One Two Films from Germany. With this award, the European cinema support fund Eurimages promotes the development of the project. This year’s jury members were Els Hendrix (Germany, Film Industry & International Film Affairs Officer at the Federal Government Commissioner for Culture and the Media), producer Luis Urbano (Portugal, O Som e a Furia) and world sales representative Tine Klint (Denmark, LevelK).

With the VFF Talent Highlight Award, endowed with 10,000 Euros, this year Munich’s copyright collective VFF (Verwertungsgesellschaft der Film und Fernsehproduzenten) supported the project Tropical Gothic (director: Isabel Sandoval) from the USA, presented here by producer Carlo Velayo. The VFF has been awarding the prize annually since 2004 to a promising new project from the “Talent Project Market”, which is organised by the Berlinale Co-Production Market in cooperation with Berlinale Talents. This year’s VFF Talent Highlight Award nominees also included producers Alba Bosch Duran from Spain, and Jack Tarling from the UK, who also pitched their projects to Berlinale Co-Production Market participants, and each received an award of 1,000 Euros.

This year’s ARTEKino International Award goes to the project Who Killed Narciso by director Marcelo Martinessi, produced by La Babosa Cine from Paraguay. With this award, which is endowed with 6,000 Euros, ARTE honours an artistically outstanding project from the Berlinale Co-Production Market.

Yesterday, at the seventh edition of the pitch event “Co-Pro Series”, 10 new series projects were presented and also connected with specific selected international partners. The project Balaton Brigade by Hungarian creators Gábor Krigler, Balázs Lengyel and Balázs Lovas, set to be directed by this year’s International Jury member Ildikó Enyedi (2017 Golden Bear for On Body and Soul), was selected for an additional appearance at the Series Mania Forum in late summer in Lille, France to meet further partners there.

At the 18th Berlinale Co-Production Market, the producers of the 35 selected feature film projects meet with co-producers and financiers. Over 1,300 individual digital meetings with potential partners among the 500+ participants in total were planned and coordinated prior to the event.

Once again, ten books suited to film adaptation will also be presented at the pitch event “Books at Berlinale” on Thursday. More than 300 films and series that have sought partners at the Berlinale Co-Production Market in past years have been completed. Four of them are in this year’s Berlinale programme, and two are currently on the short list for the Oscars.