As the title “Part of the Problem” indicates, the 2020 Forum Expanded is scrutinising its own involvement in and the structural connections between the topics of migration, racism, sexism, state authority, capitalism, colonialism, extractivism, the climate crisis, fear of the future and the loss of history. The section is examining a present that triggers a fair amount of speechlessness and thus requires words that are all the more clear. In this interview, section head Stefanie Schulte Strathaus and curator Uli Ziemons discuss the relationship between the concrete and the abstract, the search for new forms of expression and a special anniversary programme. 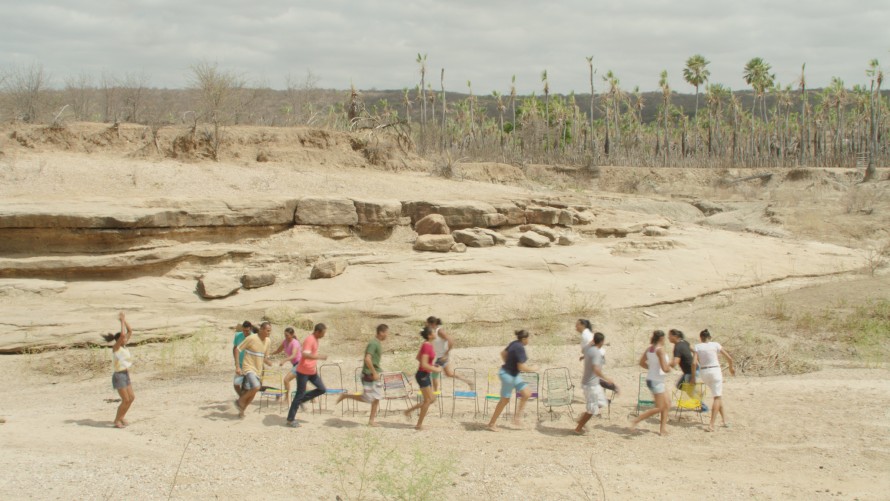 Jogos Dirigidos by Jonathas de Andrade accompanies a community of deaf people in eastern Brazil that has created its own language. The Congolese short film Matata, by Petna Ndaliko Katondolo, is primarily told through dance and Al-Houbut by Akram Zaatari via experimental sounds. This year’s programme contains an astonishing variety of forms of expression by strong artists. In a present that also prompts speechlessness...

Stefanie Schulte Strathaus: We do indeed live in a world where we are constantly being confronted with situations for which mere words are no longer enough to express what is going on around us. It can be helpful to look beyond what you have been taught to discover which alternative forms of expression and knowledge exist. Our programme presents works that provide room for this. When, as a non-deaf person, you watch something like Jogos Dirigidos by Jonathas de Andrade and try to understand the sign language depicted in the film, your own language takes a back seat.

The title of your programme this year is “Part of the Problem”. How did this topic develop?

SSS: All the topics in Forum Expanded come out of our discussions during the viewing process. “Part of the Problem” is, in a sense, a continuation of last year’s topic: “ANTIKINO – The Siren’s Echo Chamber”. In a time that seems to call everything into question, it is natural to ask what role your own work plays in this. Politically engaged cinema reveals something, but it is always also self-reflexive, in that it questions itself as a part of the whole. This is true for artists, but also for us, as curators. From the beginning, we have tried out new formats and also then abandoned them to position Forum Expanded in the festival landscape. And we have discussed artistic works with regard to whether they also implement their point of view in their form. So this is not a new position, but it now feels more important to us than ever. We can no longer talk about borders existing somewhere out there that we oppose if we don’t acknowledge that these borders also exist within ourselves. 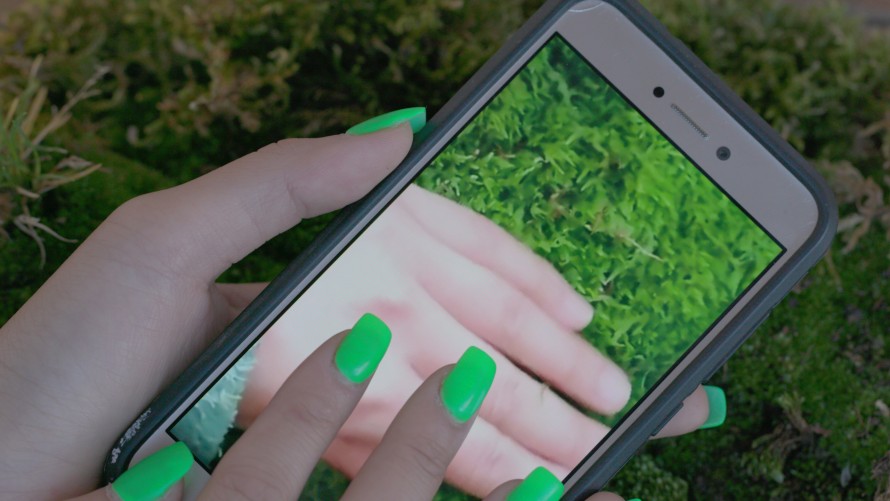 INFINITY minus Infinity by The Otolith Group

The installation INFINITY minus Infinity by The Otolith Group is about the relationship between capitalism and racism – interwoven with the current climate politics...

SSS: This work highlights another aspect of “Part of the Problem”. Often, single topics are considered in isolation when, in fact, everything is structurally connected. The former Forum Expanded curator Nanna Heidenreich once commented on facebook about the habit of looking at groups of victims of right-wing violence as individual cases: “It is not, and this is important, ‘everyone’, but it has a structure. We need to take that into account.”

INFINITY minus Infinity interweaves different formats such as performance, music and text and, in doing so, places history, the present and the future in a new relationship with each other. This trans-historic space finds its fitting equivalent in the aesthetic form: the installation carves out the structural connections between racism, capitalism, colonialism and climate politics which we can perhaps only recognise in this form because we close our minds to these connections in real life.

The Sun is also part of the group exhibition in the silent green Kulturquartier. It is a very simple but no less meaningful work by the Canadian artist Kika Thorne about climate change. The projection of a sun is powered solely by solar energy, with the required solar panels being installed on the roof of the exhibition hall. There can hardly be a more immediate reference by a work to its own mediality: it can only be seen when the sun is shining. As curators, we’re taking a certain risk in February in Berlin since there’s no back-up plan. But this radicalism is important to us.

Uli Ziemons: The work also puts the focus on our role as exhibition organisers. An exhibition with video installations consumes a significant amount of electricity, which is something we should also consider. The Sun very neatly sums this up. 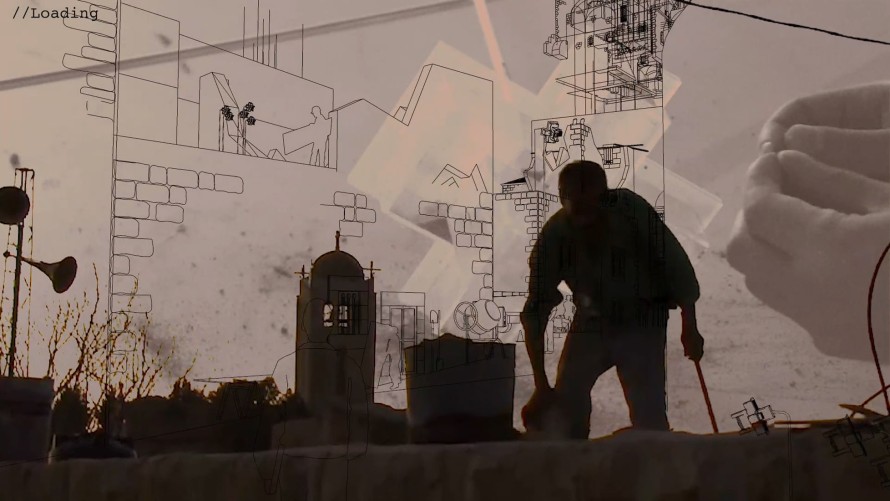 Secrets of a Digital Garden: 50 Villages – 50 Flowers by the RIWAQ – Centre for Architectural Conservation collective

Quantum Creole is a collectively created work by Filipa César about the history of weaving in West Africa. Secrets of a Digital Garden: 50 Villages – 50 Flowers by the RIWAQ collective is about the subversive potential of seeds as memory banks. What are the special qualities of both these works created by collectives?

SSS: Both works are about repressed histories of resistance and their subversive potential. The collective aspect plays a large role in this: there are many voices speaking together.
The weaving work in Quantum Creole is a type of Creole code, with messages of resistance woven into textiles. The film uses different forms of image generation to read them. The mixed-media installation Secrets of a Digital Garden depicts an imaginary future scenario in rural Palestine: a garden with 50 digital flowers that represent 50 demolished villages. Each flower conceals physical and digital DNA. The flowers are memory banks. You can access the RIWAQ archive by scanning QR-codes 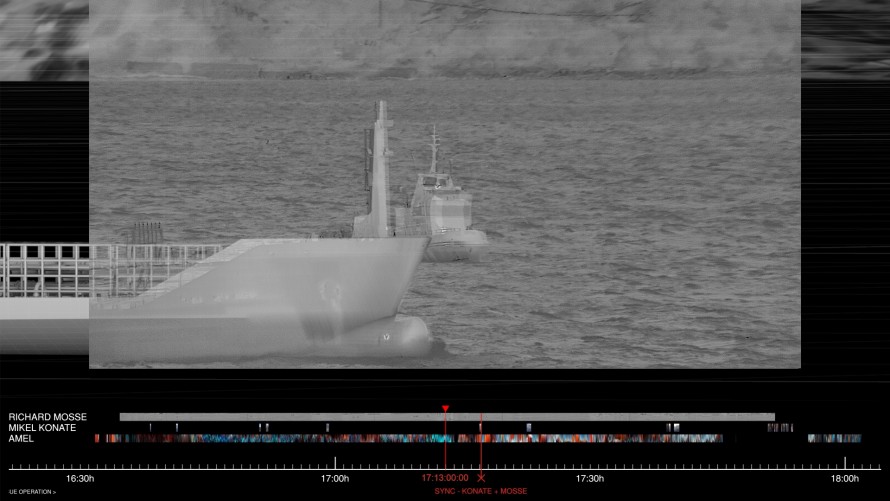 Shipwreck at the Threshold of Europe, Lesvos, Aegean Sea: 28 October 2015 by Forensic Architecture

Purple Sea and Shipwreck at the Threshold of Europe, Lesvos, Aegean Sea: 28 October 2015 use material by the artist Amel Alzakout. She was on a sinking migrant boat near the European coast and had a GoPro camera on her wrist. She spent several hours in the water... brutal and intimate images that are hard to forget. Does the artist have answers to the question of how we deal with such images today?

SSS: There aren’t any straightforward answers. At the beginning of their work on Purple Sea, Amel Alzakout and her partner and colleague Khaled Abdulwahed weren’t sure if they even wanted to make something of the material or which form this could possibly take. In the end, they decided to only use a small part of the footage. I find this film extremely courageous because it exposes itself to the public discussion about how to deal with such images. Not to mention the fact that, with this film, Amel Alzakout, of course, confronts herself again with her own traumatic experience. The impressive thing about this work is that it establishes both an abstract and a concrete level and sets them in relation to each other. On the abstract level, we recognise patterns, structures and shapes deriving from the bodies and clothing of the people in the water. At the same time, these abstract images contain the knowledge of the actual vulnerability and existential danger in which these people find themselves. The two levels are connected by Amal Alzakout’s voice and the text she wrote.

Forensic Architecture then added other material to this footage for their work, Shipwreck at the Threshold of Europe, Lesvos, Aegean Sea: 28 October 2015, in order to reconstruct what happened in the greatest possible detail – especially the rescue operation that only took place after a very long time. This is a very different use of the material from a more distanced perspective. We’re looking forward to seeing how these two works communicate with each other in the Forum Expanded programme.

Half Blue by Joe Namy is also a courageous and personal work. He uses the form of a sound installation to address aggressive policing...

UZ: In his work, Joe Namy focuses on the violent death of a close family member who was the victim of police violence. This tragic event is the starting point for an examination of the militarisation and armament of the police in the USA. The main visual element in the installation is the flashing blue light that immerses you as though you were at a crime scene. The artist thus creates a space for contemplation, a space to honour people who have fallen victim to this kind of injustice. 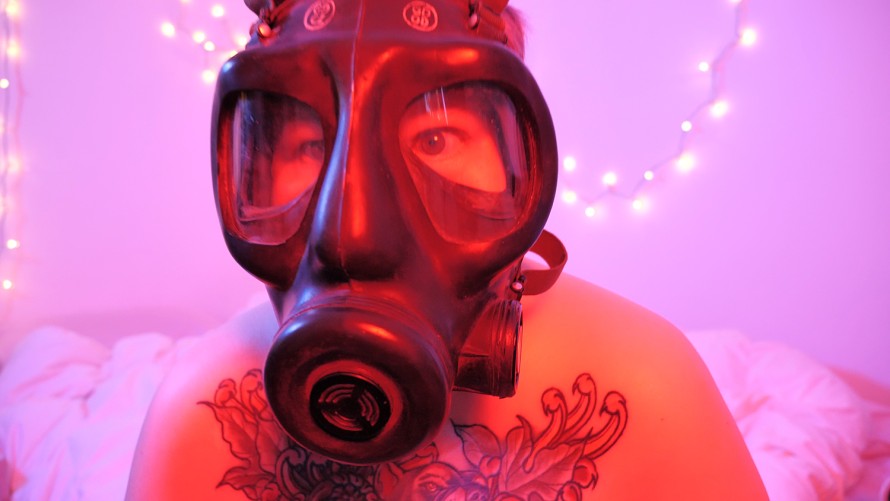 The short film trilogy NDN Survival Trilogy by the Indigenous Canadian artist Thirza Cuthand is also fascinating. It deals with extractive capitalism and its effect on Canada’s Indigenous population...

UZ: These are three really excellent short films by Thirza Cuthand. They are thematically and aesthetically interwoven and examine extractive capitalism in a very idiosyncratic and, at times, very humorous way, without losing their edge. In keeping with “Part of the Problem”, she also questions her own role as an artist in this context. Part of this work, for example, is about her participation in the Whitney Biennale last year. There were many protests from participating artists about the fact that a member of the Whitney Museum’s board was making money from the production and sale of tear gas. Thirza Cuthand poses the question of whether she should withdraw her work and allows us to take part in the decision-making process. 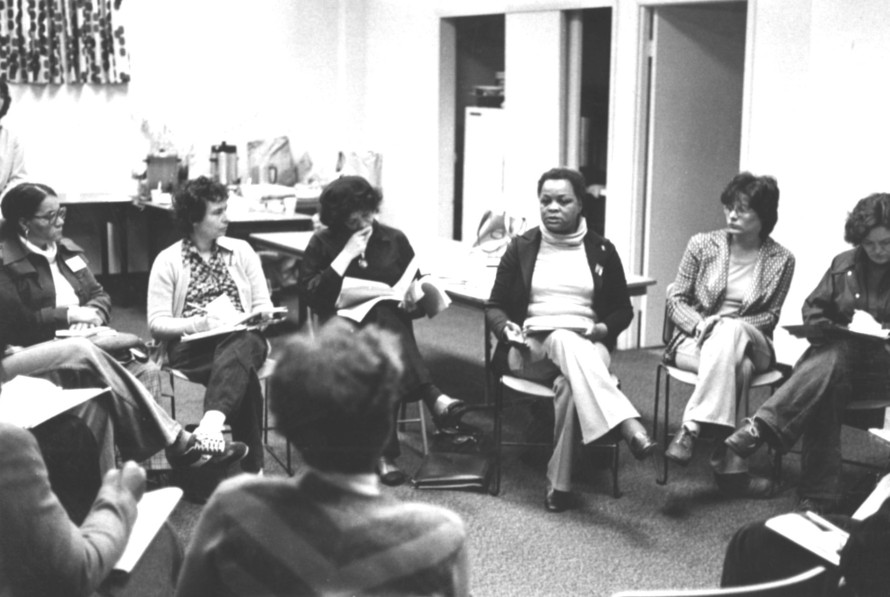 Together with the Forum, you are celebrating an anniversary this year that looks at the cinematic heritage of the founding year of 1971 and its significance for the present. What can we expect from the special programme and the day of paned discussions?

SSS: 1971 was a particularly exciting year for the Forum, packed with interesting, dynamic films. Every time I look back at this year I think: What a programme! It contained legendary films like L’Âge d’Or by Luis Buñuel that we are all familiar with today but that were unknown back then. Of the nearly 60 films shown in the founding year, over 30 titles remain in the archive. And already in year one, some films were subtitled in German so they could go on to be screened elsewhere and distributed throughout the German-speaking world. The copies made then remain in the Arsenal archive, and many are now unique. Other films were preserved because, back then, collectives like Newsreel and Iskra considered not only production but also distribution to be a political act. They wanted their films in circulation, which required a large number of copies to be made. And thus, some of these films ended up with us for distribution. There are also personal gifts, like the one from Med Hondo who gave Ulrich Gregor, co-founder and long-term Forum head, a copy of his film Mes Voisins (My Neighbours). Word had got around that the Arsenal is the home for independent, political and experimental cinema.

In the 1970s, the connection between film history and contemporary cinema had already established the foundations for the future of the Arsenal. I find it very exciting to once again screen the films from that time in a programme. We are showing one half during the Berlinale and the rest afterwards at the Arsenal.

On the day of panel discussions, we’re exploring the ways in which the programme from the founding year relates to today. In our opinion, works from film history are now becoming like new films. In the panels, we want to take up aspects from that time – such as collective working, feminism and decolonisation – and discuss them in a present in which they have not, as it seemed for a long time, faded into the background but instead are once again very current. And who knows what subversive messages from the films and programmes of 1971 are only just reaching us today?