The programme for this year’s Perspektive Deutsches Kino is strong and diverse, both visually and in its forms. One thematic focus is the examination of the meaning of “homeland”. In this interview, section head Linda Söffker discusses the search for identity in fast-moving times, outstanding documentaries and women who control the fate of the world.

How did you decide on this year’s thematic focus of “homeland”? Was it there from the beginning?

We don’t have a topic in mind when we start putting the programme together. It’s more a case of noticing things during the viewing process, for example, if certain motifs keep reappearing. I hit on the idea when I watched Schlaf (Sleep) by Michael Venus. The film comes across like a “heimatfilm”, a film romanticising the homeland, but in certain ways it is its antithesis. Although Schlaf is set in the present, it gives us the impression that we’re in the 1950s. It looks as though time has stood still in the secluded hotel in the forest where most of the action takes place. And then, out of this homeland-film setting, a horror story develops. Sandra Hüller plays a mother who, due to a severe trauma, is repeatedly haunted by terrible nightmares. The dreams possess her to such an extent that she almost goes crazy. Schlaf is a contemporary homeland film that reveals a lot about our country and our past. Looking at our programme, I then noticed that every film is a homeland film in a way – at least if you define homeland as identity. Not, of course, a “heimatfilm” in the sense of the idealising cinema of the 1950s, but as a scrutiny of our current living conditions in Germany and Europe.

Does that mean the homeland film genre is being redefined?

The homeland film genre has been repeatedly questioned and redefined over the decades. In the 1950s, its kitsch and romanticising approach represented a form of escapism. That’s how the German homeland film has gone down in international film history. Of course, this German notion of “homeland” and “homeland film” have negative connotations today. In the late 1960s and early 1970s, filmmakers like Volker Schlöndorff and Rainer Werner Fassbinder then made their own kind of homeland films. Or Edgar Reitz, who created a homeland trilogy showing very normal people in their daily lives. In the 1990s, homeland films found their place in German comedy. And today, in a time when some borders are being dismantled while new walls are also being built, questions about identity and homeland are once again becoming a hot topic. 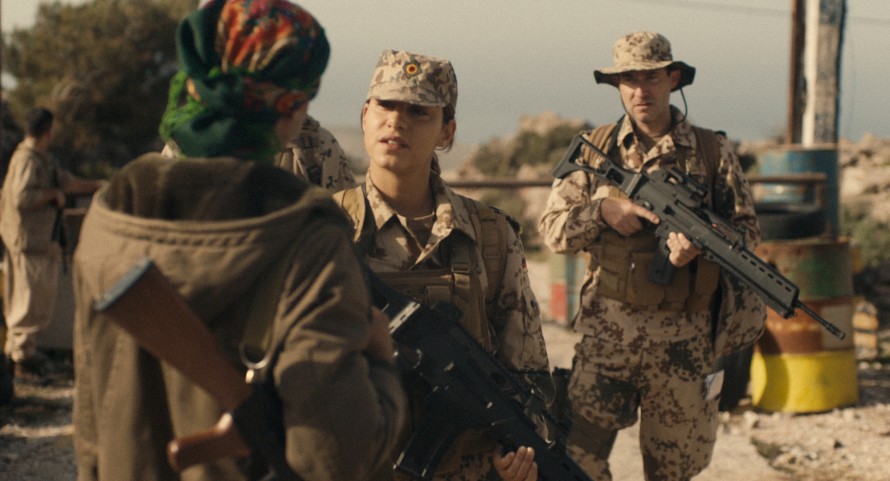 One of the films posing these questions about identity and homeland is Im Feuer (Sisters Apart) ...

Exactly. Daphne Charizani’s film is about the movement of refugees. Rojda is a Kurd who emigrates to Germany while her sister remains in Iraq. Years later, the two sisters meet each other wearing contrasting uniforms – those of the German military and the Kurdish militia. What does this do to both their senses of identity?

A completely different example is the documentary Walchensee Forever by Janna Ji Wonders in which the filmmaker questions her own identity. Where does homeland begin and where does it end? Is there such a thing as a collective family memory? She searches for answers in the stories of three generations of women in her family. Her grandmother ran a hotel on Lake Walchen where her mother grew up and worked until she and her sister opted to live as hippies. Both emigrated to America to make music. When the filmmaker’s mother returned to Germany, she became one of the women in Rainer Langhans’s harem. Janna Ji Wonders explores the past and the present and asks whether the longing for a place, Lake Walchen, can be inherited and whether you carry home in your heart.

Working in a globalised world

In the opening film, Kids Run , we meet a dysfunctional family for whom a sense of home seems to still be a long way off...

Barbara Ott’s film does indeed depict a family’s dysfunction but it also looks at how, or whether, a sense of home can develop even in spite of precarious circumstances. It is about a young father, Andi, who has three children by two different women. He has split up with both of them. The kids are constantly torn between the different parental set-ups. While Andi struggles to stay afloat, one of the mothers has found a new partner and there is no permanent place for the children in her new life. Kids Run shows the things that can cause changes in the understanding of “home” and “identity” – for example, when you suddenly can no longer identify yourself by your job, because you lose it or you can only make cash-in-hand on a building site. When you perceive this daily grind as part of your identity and then it suddenly dissolves – that definitely counts as one of the causes. Barbara Ott has already explored this family story in Sunny, for which she won a FIRST STEPS Award. Now, in her debut feature film, Kids Run, she follows up on this story. 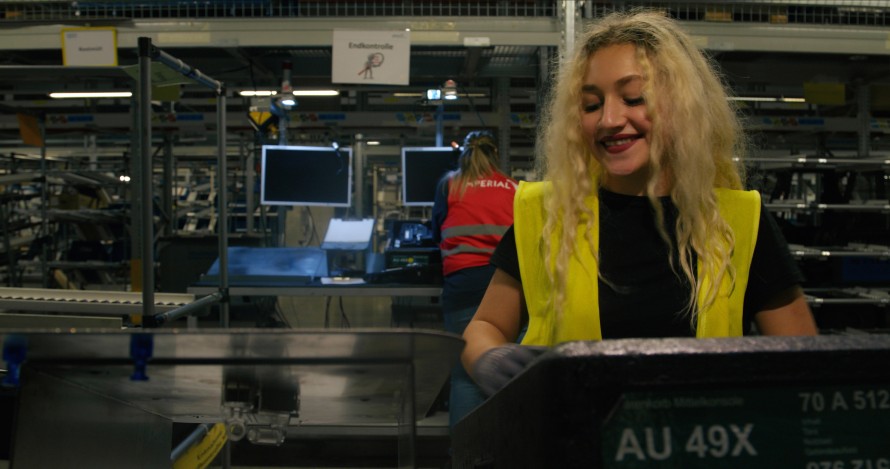 The question of what identity means when your job disappears is also addressed in the documentary Automotive. Jonas Heldt has previously featured in the Perspektive as a producer. Automotive is his first feature-length film as a director. His female protagonists work as a supplier and a service contractor for Audi – one on the conveyor belt, the other as a headhunter for top jobs. Both work hard but both are also aware that, in this time of digitalisation and automation, they won’t be required forever. And actually, the worker on the conveyor belt loses her job. The women have very different ideas of life but they are united in their dreams for the future: owning a car, having an easy life in a warmer country. Automotive wonderfully reflects on what the future means when your job is endangered.

Women who control the fate of the world

There is a really remarkable showing of strong women in the programme...

Indeed. Six of the eight films in the programme were made be female directors. And almost all the protagonists are women: women who are extremely proactive and who deliberately control the fate of their worlds. Like the protagonists in Automotive or Sahra Wagenknecht in the documentary Wagenknecht by Sandra Kaudelka. This film is a portrait of an influential woman who is very ambitious but also empathetic and willing to learn. We get to know how she does politics and how her entire life is related to her job. The camera observes Wagenknecht at work and doesn’t show any private or biographical details. I find this approach to be very effective in Wagenknecht.

Incidentally, strong women also play a role even when they don’t appear on screen. Garagenvolk (Garage People) by Natalija Yefimkina depicts men in Northern Russia and the very different and diverse hobbies they pursue in their garages. One has converted his garage into a gym, another has built a maze and thus created his own legacy. Although the film centres around men, woman are present via their very absence.

In Ein Fisch, der auf dem Rücken schwimmt (A Fish Swimming Upside Down), a woman appears out of nowhere. She is the lover of both a father and his son and becomes a screen onto which the two men project their longings. This set-up leads to a game played with the audience: Who knows what about whom? Does the father know about his son’s affair? And what role is played by other women, such as the housekeeper, in this situation? It’s a very interesting work by Eliza Petkova who has reinvented herself with this film after presenting her debut, Zhaleika, in the 2016 Generation. Ein Fisch, der auf dem Rücken schwimmt is her graduation film from DFFB.

Once again, you’ve invited a guest film. Which one is it this year?

We are continuing our cooperation with the FIRST STEPS Award and screening their winning documentary, Out of Place by Friederike Güssefeld. The film is being shown on Berlinale Publikumstag and is being introduced by FIRST STEPS’ artistic director, Andrea Hohnen. There will be an extensive Q&A after the screening. We have established this in the last few years and it is always very well attended.

Away from the eight premieres, are you also involved in Berlinale Goes Kiez again this year?

Yes, with three films. We’re showing Schlaf at Neue Kammerspiele in Kleinmachnow and Walchensee Forever in the Moviemento in Kreuzberg. In addition, we are screening our opening film, Kids Run, in Plötzensee prison. The inmates are of course being invited, but the Berlin general public are also very welcome.

And you are also continuing the “Reden über Film” series in the Audi Berlinale Lounge. Which talks are planned for the 70th Berlinale?

This year, on February 24, we’re talking to the Produzentenverband (Producers’ Association) because last autumn they established a new talents section. We want to offer their representatives the opportunity to introduce themselves so that interested parties, especially producers from the film schools and young producers in the German industry, can find out more about what the association does, what it believes is important, why it has set up this new section and, ultimately, if they themselves want to become involved.

We want to dedicate our second event, on February 26, to documentaries and we’ve invited the directors of Walchensee Forever, Janna Ji Wonders, and Wagenknecht, Sandra Kaudelka. The event is called “What Does a Script for a Documentary Look Like?” When applying for funding, it is always necessary to submit a script. But if, as a documentary maker, I also want to research things during the process of making the film and hopefully come across something surprising, how can I convincingly write this down beforehand and what do I actually submit? We want to discuss this issue and have also invited producer Martin Heisler (Flare Film) who supported the two filmmakers.

...and hopefully there is also something to win this year...

There certainly is. The films in our programme are once again competing for the Compass Perspektive Award for Best Film which is endowed with 5,000 Euros. In our jury this year we have Mia Spengler, who presented Back for Good in our section three years ago, as well as screenwriter Bernd Lange and Made in Germany manager and producer Melanie Andernach. Bernd Lange wrote the screenplays for a number of films directed by Hans-Christian Schmid and Melanie Andernach is co-producer of Talking About Trees, the film that won both the Glashütte Original – Documentary Award and the Panorama Audience Award last year.