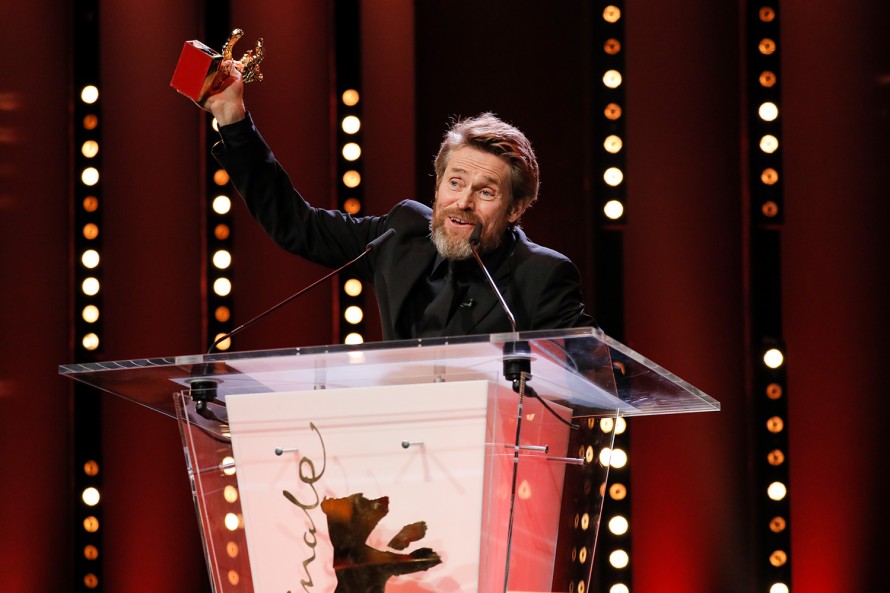 Willem Dafoe at the award ceremony

The 68th edition of the Berlin International Film Festival dedicated the Homage to American film and theatre actor Willem Dafoe and presented him with an Honorary Golden Bear in recognition of his life’s work. To accompany the awarding of the Honorary Golden Bear, a screening of Daniel Nettheim’s film The Hunter (Australia 2011) took place following the official presentation at Berlinale Palast February 20, 2018. The film programme for the Homage was curated by Deutsche Kinemathek.

Willem Dafoe has participated in more than 100 film productions, enriching them with his expressive performances and formidable presence. His enormous technical range as an actor extends all the way from the personification of the unfathomably evil to the portrayal of Jesus of Nazareth. In addition to his celebrated cinematic appearances, Dafoe has also pursued a parallel career in theatre, his other passion.

“Willem Dafoe is a close friend of the festival and has often been a guest at the Berlinale in the past in the scope of film screenings and even as a member of the International Jury in 2007,” comments Festival Director Dieter Kosslick. “I am really looking forward now to welcoming him to the 2018 edition of the festival as a guest of honour and recognising his lifetime achievement with the Honorary Golden Bear.” 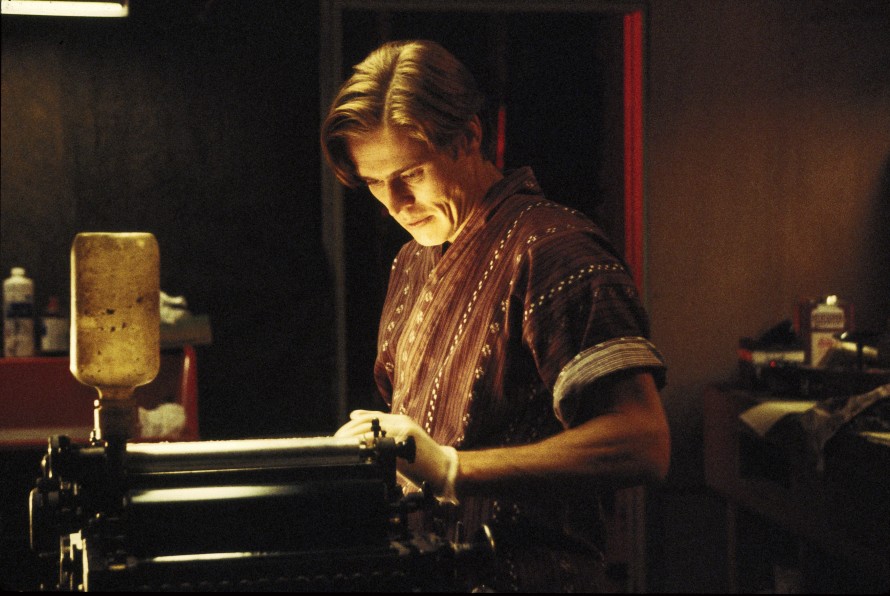 TO LIVE AND DIE IN L.A. © 1985 METRO-GOLDWYN-MAYER STUDIOS INC., All Rights Reserved.

To Live and Die in L.A. by William Friedkin

Willem Dafoe began studying theatre formally at the age of 17. In 1977, he was one of the founding members of the renowned New York theatre ensemble “The Wooster Group”, where he remained a member for several decades. In addition to his activities on stage, Dafoe increasingly began to turn his attention to film work starting in the early 1980s. He first gained exposure through his appearance in Kathryn Bigelow’s debut film The Loveless (1981) and in Streets of Fire (1984) by Walter Hill. In William Friedkin’s police thriller To Live and Die in L.A. (1985) he played ruthless counterfeiter Eric “Ric” Masters, a villain who will stop at nothing in order to neutralise his adversaries.

In 1986, Dafoe’s portrayal of Sergeant Elias Grodin in Oliver Stone’s anti-war drama Platoon would expose him to a wider audience. He received his first Academy Award nomination for his performance in the break-through film. Two years later, Martin Scorsese successfully recruited him to fill the leading role as Jesus Christ in his hotly debated literary adaptation The Last Temptation of Christ (1988). Still in the same year, Dafoe co-starred alongside Gene Hackman in director Alan Parker’s civil-rights-era drama Mississippi Burning (1988). In the film, Dafoe plays a young FBI agent fighting against racism and the Ku Klux Klan. 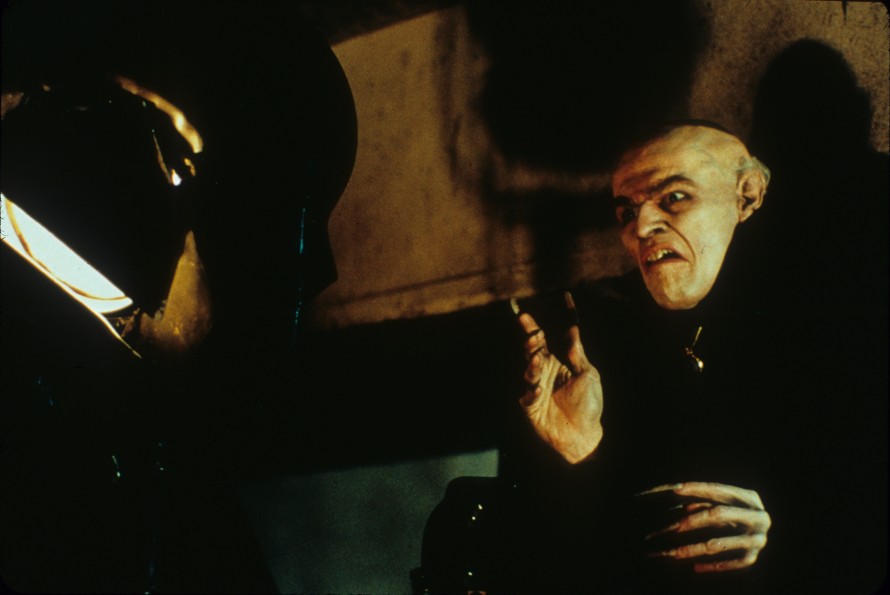 Shadow of the Vampire by E. Elias Merhige

Many multifaceted roles would follow, in films such as Born on the Fourth of July (1989), Wim Wenders’ In weiter Ferne, so nah! (Faraway, So Close! 1993) and The English Patient (1996). In the year 2000, Dafoe shined as Max Schreck in the horror film Shadow of the Vampire by director E. Elias Merhige. His brilliant turn as a member of the undead earned him his second Academy Award nomination.

In 2002 Dafoe appeared under the direction of Paul Schrader in the biopic Auto Focus. In 2004 Dafoe collaborated with director Wes Anderson on the latter’s The Life Aquatic With Steve Zissou. Parallel to these appearances, he slipped into the role of Norman Osborn, aka the villainous “Green Goblin”, three times for the Spider-Man movie franchise (in 2002, 2004 and 2007).

In 2009 Danish director Lars von Trier cast him as the male lead alongside Charlotte Gainsbourg in his psycho-thriller Antichrist — the film became the subject of controversy due to scenes featuring graphic sex and violence. In 2011 Dafoe put on an extraordinary acting performance once again as a lonely hunter in Daniel Nettheim’s thriller The Hunter. Three years later, in Abel Ferrara’s biopic Pasolini Dafoe portrayed the Italian filmmaker in the final period of his life, shortly before his murder.

On stage he has worked with Richard Foreman in “Idiot Savant” at The Public Theatre and two international productions with Robert Wilson: “The Old Woman” opposite Mikhail Baryshnikov and “The Life and Death of Marina Abramovic”. For the latter project, Italian actor and director Giada Colagrande followed the rehearsals with her camera, capturing footage that would later form the basis for a documentary film (2012). Willem Dafoe most recently performed a new theatre piece, “The Minister's Black Veil”, based on Nathaniel Hawthorne’s short story and directed by Romeo Castellucci.

Last year Dafoe has appeared in Kenneth Branagh’s feature Murder on the Orient Express (2017). The German-American joint effort The Sleeping Shepherd (directed by Frank Hudec) is currently in pre-production. He has also finished filming under the direction of Julian Schnabel for At Eternity’s Gate, in which he plays Vincent van Gogh. From March 2018 onwards, German cinema audiences will be able to see Willem Dafoe in the much feted feature The Florida Project (directed by Sean Baker). Dafoe’s role in The Florida Project earned him both a nomination for the British BAFTA Awards and recently his third nomination for an Academy Award, in the category of Best Supporting Actor.

The ten films of the Homage: