Forum Expanded 2018
Shot in a creaky, wooden-floored Parisian recording studio at an inaugural three-day “forum of ideas” focusing on the manifold possibilities of “Resistance” (the title of Jean-François Lyotard’s unrealized follow-up exhibition to his 1983 “Les Immateriaux”), occasional collaborators Ben Rivers and Ben Russell have produced what initially appears to be a structuralist document of a philosophical discussion in-the-round. This “appearance dimension” is deceptive, of course, and with the aid of an immersive 5.1 sound-mix, a Green Man, a Green-Man-shaped-Infinite-Void, a dose of kinetic digital magic (courtesy of US-based artist Peter Burr), and an impressive cast of thinkers, critics, curators, and artists, a document of Resistance slowly transforms into The Rare Event – a portal that joins all dimensions into one.
by Ben Rivers, Ben Russell
with Tuomo Tuovinen, Etienne Balibar, Federico Campagna, Manthia Diawara, Timothy Morton, Jean-Luc Nancy, Elizabeth Povinelli, Gayatri Spivak, Dorothea Van Hantelman Switzerland / France / United Kingdom 2018 English, French 48’ Colour Documentary form

Ben Rivers, born in 1972, is an award-winning artist and filmmaker. His films have been exhibited worldwide at numerous galleries and festivals. Between 1995 and 2005 he co-programmed the Brighton Cinematheque. He is currently a Radcliffe Fellow at Harvard University. After A Spell to Ward Off the Darkness (2013) this is his second collaboration with Ben Russell. 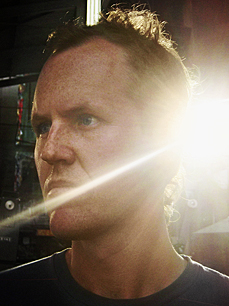 Ben Russell, born in 1976 in the USA, is an artist and filmmaker currently living in Los Angeles. His work’s focus lies at the intersection of ethnography and psychedelia. He has received several grants; his work has been awarded and exhibited worldwide. He is co-founder and curator of the Magic Lantern Cinema in Providence, Rhode Island. In 2012 Forum Expanded presented Austerity Measures, his collaboration with Guillaume Cailleau about the Exarchia district of Athens.