"A Space Discovery" – the motto of Berlinale Talents 2015 – chimes well with section head of Perspektive Deutsches Kino Linda Söffker, because spaces and places play a central role in her 2015 film selection. In this interview, she also speaks about a breath of fresh air in young German cinema, changing production conditions and an awareness of form in the 2015 Perspektive films. In the Press Release you announced something is happening in German film. Can you describe the current mood?

There was, for example, a symposium on 'German Mumblecore' which reflected the general mood in which exciting and liberated productions are taking place, usually without funding and in an unbureaucratic way. Filmmakers often find the long trek through institutions too time-consuming even though they'd naturally like the money. So they just start filming. I'm making it sound easy now but actually it isn't because of course it means self-exploitation. The films don’t make any money, they don’t attract the big crowds but they do win a lot of prizes at diverse festivals and make audiences happy.

Is that just the case for the young generation?

The movement is chiefly led by young people but there are also older filmmakers who may have made a good living out of the system in the past but who now see little future for themselves within it. More and more filmmakers want a piece of the funding pie and it's becoming increasingly difficult for each individual. Many jump from one side to the other, making their films with or without funding, with or without TV, so whichever way it's not primarily an indication of quality.

Are there reasons for this voluntary-involuntary emancipation from funding systems and television?

There needs to be a rethink because so much is being produced. Television can't be a partner in many films because there are simply too many projects or they don't fit in with the format. This year we've got eight feature films in the programme and only two were coproduced with television money. Lots of material is rejected and nevertheless made anyway. This situation has led to the creation of these 'film families' in which everyone does everything. Someone does the camera and then next time they're directing and simultaneously doing the catering. In this way films are made which clearly have professional aspirations. Everything which is unprofessional is glossed over with a happy-go-lucky attitude. This 'We'll make it anyway, even without money' releases tremendous creativity and passion. And you can see this fun and freshness in the films themselves.

This means your task ultimately becomes more and more important. The more that's produced, the more selection is required...

As a festival organiser you can also develop an awareness of form in the general public so that audiences will be open to films that are at first look different and strange. Whoever goes to a festival with awareness and an open mind, and places their trust in the Perspektive Deutsches Kino, is looking forward to something new and interesting. With this excess of German films, many people are grateful there's a section on which they can concentrate and which – as in our case – casts a selective view over the cinema generation that's coming up. We're certainly not reinventing the wheel but we are trying to introduce people to different film aesthetics and we hope they'll continue to seek these out in the future.

This year we have - just like the Berlinale Talents – a "Space Discovery" theme. That's already evident in many of the film titles in the programme: Freiräume (Unoccupied), Ein idealer Ort (An Ideal Place), Der Bunker (The Bunker), HomeSick, Im Spinnwebhaus (The Spiderwebhouse). A keen awareness of form

You speak of a strong awareness of form this year. Is that evident in the cinematic presentation of places?

Yes. For example, Freiräume (Unoccupied) by Fillippa Bauer is a documentary in which four women who live alone speak about how they have arranged their lives in their apartments since their grown-up children moved out. The camera just shows the spaces, these apartments, and you hear their voices off-screen. The viewer designs everything possible in their head: who it is, what the mothers probably look like and in what way they differ from one another.

In another documentary, Sag mir Mnemosyne (Tell Me Mnemosyne), filmmaker Lisa Sperling goes in search of her great uncle who was a cameraman and who she never personally met. She compares the places in his films with the images she's filmed of them today: on the screen, a montage is created of the old black and white 4:3 film material and today's 16:9 colour material. The director interviewed friends of her great uncle and out of this composed a text which, as in an essay film, is spoken over the images and lets the man emerge before the audience's inner eye.

This year I've often come across films which remove themselves from the 'documentary as a feature film' model. Sprache:Sex (Sex:Speak) by Saskia Walker and Ralf Hechelmann is an example. The film shows interview situations in which different people, including a child, speak about sex. Some longer, some shorter sections which, in the end, form a big story about intimacy.

Since we're speaking about places which are mostly very restricted, very concentrated, the impression arises that the stories being told are also very much focused on very close, familial set-ups. Or am I wrong?

No, that's absolutely right. As long as I've been with Perspektive Deutsches Kino, many of the stories have been about familial set-ups. The political film with big, state of the nation aspirations can only rarely be found in the next-generation section, at least where feature films are concerned. In documentary it's more likely, but there the crucial question remains: does the film have the character of a reportage or has it actually found a cinematic language. And this year the films are again strongly focussed on the familial context – whether that's the relationship between couples or siblings or a substitute family, as in the feature film Elixir. In Elixir a group of artists live and work together in a former factory. They give each other mutual support, help each other out, dream and also argue – all like in a real family. At the same time this film also shows how these conflicts do not remain private and also exist in an artistic-political context. All the characters are based on real people: artists from the surrealist movement who meet once again in contemporary Berlin. 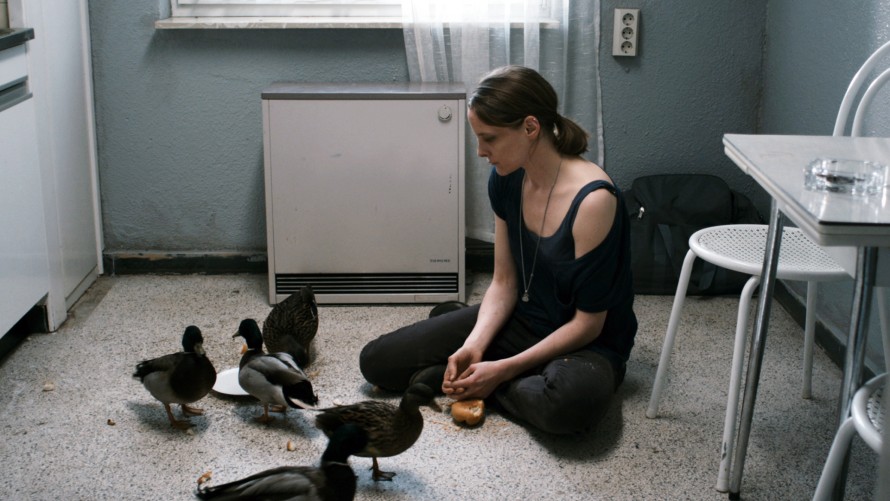 What else is there to say about the other feature films and the way they've been produced?

Sibylle (Like a Cast Shadow), for example, is a film made by Passanten Film in coproduction with Bayerischer Rundfunk (Bavarian public broadcaster) which meant they were able to shoot parts of it around Lake Garda in Italy. Sibylle is on holiday there with her family when she witnesses a suicide and subsequently sinks deeper and deeper into paranoia. She's played by Anne Ratte-Polle who also takes a second title role in our programme, in Wanja. As Wanja she’s thrown back into society after years in prison and attempts – far away from criminality and drug addiction – to find a way through life. The Swedish-born director Carolina Hellsgård's short films have already screened at many international festivals; Wanja is her debut feature. Bube Stur by Moritz Krämer is a low-budget film coproduced by the German Film and Television Academy (dffb) and the Film University Babelsberg. A young woman comes to work on a farm deep in the Black Forest. Little by little it's revealed that she's possessed by an ulterior motive. The film focuses very closely on this character and the farm. Nevertheless, it's a film that gets out into the landscape and explores the location. It's important how far it is to the next supermarket, whether you go by bike or moped, where the teenagers from the village meet and what the playgrounds are like. All of that plays a role. They're outside, but they're stuck in a single place...

Der Bunker (The Bunker) by Nikias Chryssos also appears to concentrate closely on its location but the film doesn't sound particularly realistic...

That's true. It's bizarre and also a little bit scary: the situations it relates are on the whole very normal, very familiar. At first glance the only thing that seems out of the ordinary is the son of the family who is a child, and yet is played by an adult actor. That somehow generates anxiety. Bunker deals with topics like education and excessive expectations of children and places the audience in a creepy situation. A very interesting film.

Is Bunker one of the films you've defined as cross-genre?

Yes. Lots of young German filmmakers are currently discovering genre for themselves. They want to try out established formulas and combine them with old and new themes. Different influences are being synthesised into new forms, developing into a cross-genre. I've seen many films like that this year and I've also selected some for the programme: HomeSick, Sibylle, The Bunker and also Im Spinnwebhaus (The Spiderwebhouse). Last year we had the Midnight Movies which stood out a little thanks to their 11 pm screening slot. This year I wanted to incorporate them normally into the programme without any special interest slots... And suddenly I had too many feature films which gave me the idea of departing from our normal schedule and, on three evenings, having two premieres – at 7.30pm and 8.30pm.

In the last few years you've not only screened films but also had a lot of discussion about the programme. Are you continuing your discussion events in 2015?

Yes. "Made in Germany - Reden über Film" ('Talking About Film') is continuing in the Homebase Lounge with support from Glashütte Original. We're restricting ourselves to two events this year: one is exploring 'Freiraum Low Budget' ('Freedom Through Low Budgets') and the other is devoted to 'Schutzraum Hochschule' ('The Security of Film School'). And the panel with the Deutsch-Französischen Jugendwerk (Franco-German Youth Office) is again taking place, this time about the working conditions of women and the question of whether a woman's quota is necessary when it comes to awarding funding and directing contracts – a discussion that's growing in intensity in Germany at the moment and which the 'Pro Quote Regie' (Pro Directing Quota) initiative has made high profile. It's also a concern in France and the proponents for a quota in Germany are referring to a group of French female directors. A dialogue will allow the different positions to be assessed.