In this year's Perspektive Deutsches Kino, young German cinema shows its strength and diversity. A dominant theme of the programme is “departure”. In an interview, section head Linda Söffker talks about the eleven films nominated to compete for the “FGYO – Prize Dialogue en perspective” - as well as the rest of the programme. 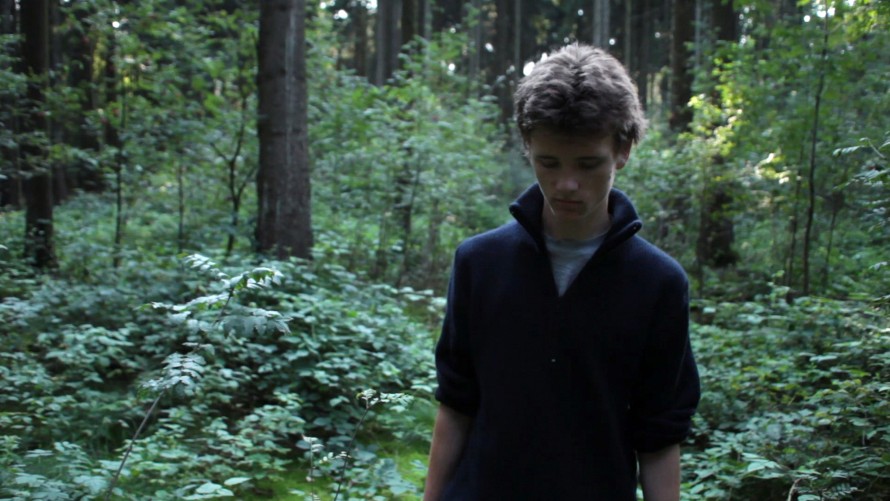 Dominic Sterman in Die Wiedergänger (The Revenants) by Andreas Bolm

This year there seems to be a thematic focus on films about new beginnings, about a breaking away from everyday life that's either voluntary or involuntary. I'm thinking about the opening film Freier Fall (Free Fall), but also Silvi...

The opening film Free Fall by Stephan Lacant not only tells the story of a new beginning, but of a man who is thrown off the track of his life. Marc has a secure job, his wife is pregnant and they have just moved next door to her parents in a row house settlement. They are happy together, everything is fine. But then a work colleague falls in love with him. At first Marc resists it, but at some point he has to admit that he has stronger feelings for Kay. A new beginning would be the next step.

Silvi (Silvi - Maybe Love) by Nico Sommer picks up where Free Fall finishes. In the first scene of the film, Silvi is left by her husband. She was married for 20 years and, now, in her late forties, she's no longer the youngest of women. As her husband was her first and only partner, she wants to try something new. She meets men, who all have a certain amount of sexual experience under their belt and who now want to share it with Silvi. And they're really some of the hottest candidates. 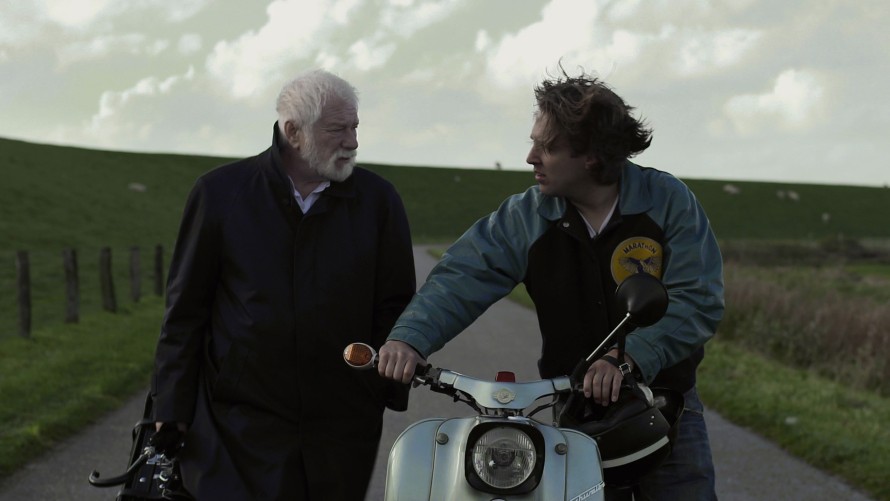 Pavel Bobrov and Anselm Breier in Kalifornia by Laura Mahlberg

The Melancholy of Farewells

The films Kalifornia and Die mit dem Bauch tanzen (Dancing with Bellies) both address new beginnings of somewhat older people. What is the appeal of the next-generation´s filmmakers?

In Kalifornia by Laura Mahlberg, an older man lives alone in a caravan by the sea. One day he picks up the phone, calls his old friend Jack and decides to visit him in California. He sets off with his little suitcase. On his way he meets all sorts of people and realises that the world has been alien to him for so many years. Finally he returns to his caravan. That might sound a little depressing, but in fact it isn't. It's mostly about a sense of upheaval. California serves as a surface to project his desires. In a positive sense, he determines at the end that it's nice at home as well. He carries his armchair to the beach and looks out over the sea.

The documentary Die mit dem Bauch tanzen works in the opposite fashion. Here it's about the moment of bidding farewell, in this case, farewell youth. The director Carolin Genreith, only 28, is scared of reaching the difficult age of 30, because she fears changes of her body. Meanwhile her 50-year-old mother feels very well in her skin. She belongs to a belly-dancing group. With a somewhat desperate, then later very loving and personal eye, the director approaches her own mother and confronts her with her own fears. In the end she's dancing herself, though without a bare belly. 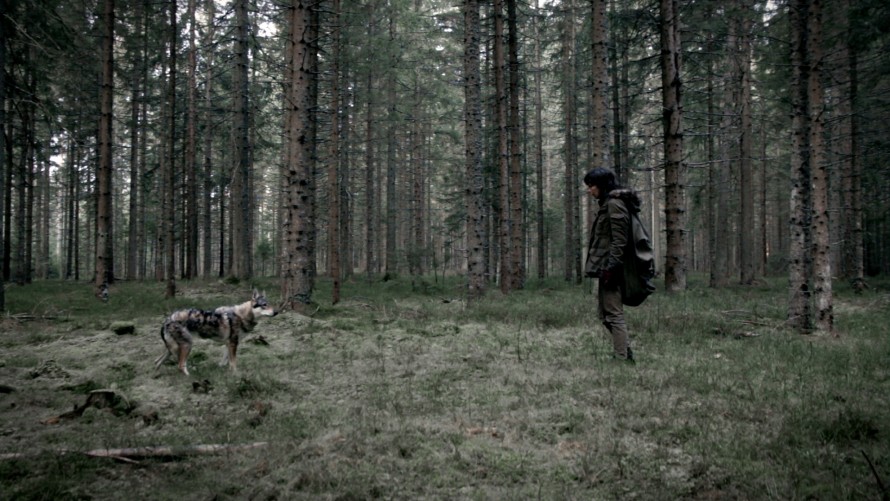 Playing with Image and Memory

Last year we talked about how filmmakers at the beginning of their careers don't often have the confidence to enter the realm of fantasy and visions. This year, there are two films that imagine apocalyptic scenarios: Endzeit (End of Time) and Die Wiedergänger (The Revenants).

Andreas Bolms Die Wiedergänger isn't primarily an end-of-the-world film, but rather a search for a lost home. It's an artful essay, which tells a story of losing one's home and about the forest in very penetrating images; actually it is a poem and a game with imagery and memory. The film is unique in the repertoire of invited movies as it touches the boundaries between feature and documentary.

In Endzeit by Sebastian Fritzsch, several comets have impacted the earth and killed off most of humanity. The opening scene provides a powerful image of a post-apocalyptic world: a young woman builds a trap, kills a rabbit which she skins and roasts over a fire. I find that the actress Anne von Keller is really great in this role. She has a very interesting face, very special eyes that make her look like a deer running through the woods in this context. Later we get touches of the horror genre. The director Sebastian Fritzsch certainly leaves behind “home pastures”, because works by young filmmakers do often take place in a realistic environment or revolve around themes like family, close friends or the search for one’s own roots.

DeAD by Sven Halfar does this in a very playful manner. Following the suicide of his mother, the cool Patrick shows up at the 60th birthday of his father, who he has never seen in his life but who he feels is indirectly responsible for the death of his mother. The tragedy of the situation isn't told as a drama, but rather as trashy grotesque: very colourful, fresh and stylised, without resorting to clichés.

In our last interview, you said that you keep an eye out for a heightened awareness about form in young filmmakers and new, unconventional ways of telling stories, both dramaturgical and visual. Is Chiralia one result of this search?

Chiralia by Santiago Gil was really a stroke of good luck. For a long time I looked for a film to accompany Die Wiedergänger. Chiralia does not just correspond thematically with Die Wiedergänger, but also through a special cinematic language with its unique, independent approach to form. A father goes swimming with his son in a lake in the forest. Suddenly the boy sinks underwater and doesn't return. The man leaves the water by himself and reports the disappearance of the child. The camera carries the story from person to person, from one narrative perspective to the next, until in the end no one is really sure whether the boy has disappeared at all.

Alongside Die Wiedergänger another film blurs the boundaries between feature and documentary: Zwei Mütter (Two Mothers). Which means are employed here?

While Die Wiedergänger doesn't rely on the documentary form, but searches for the point where fiction begins, in the case of Zwei Mütter by Anne Zohra Berrached exactly the opposite is true. The fictional story is told through documentary methods – almost as a protocol and based on well-researched facts and statistics. The film is about lesbian spouses who would like to have a child and are looking for a sperm donor. It soon becomes clear that it's not that easy for same-sex partners to get support from a “normal” sperm bank. The film tries to answer the question of why it is so difficult and how the women's relationship is limited and unsettled by the experience. 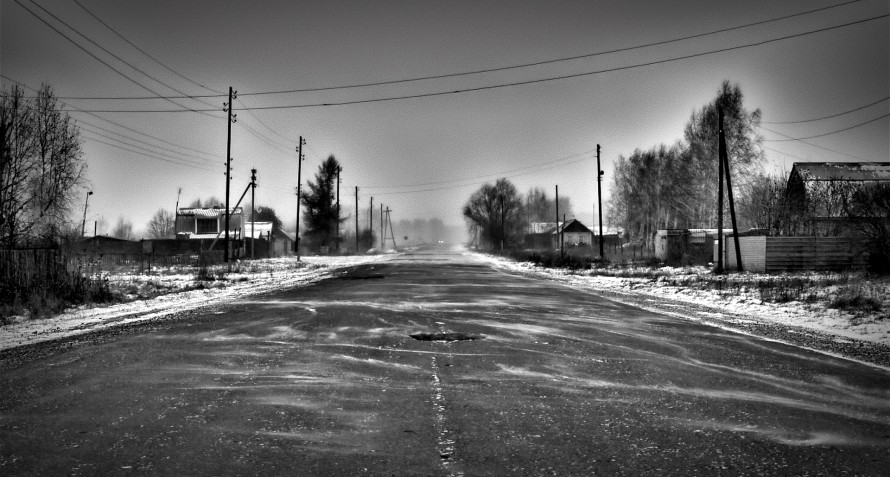 How would you categorise the documentaries Metamorphosen (Metamorphoses) and Einzelkämpfer (I Will not Lose)?

Sebastian Mez' film Metamorphosen is about the area surrounding the Majak nuclear reactor in the southern Urals, site of the world's third worst nuclear accident in 1957. Much was reported about Chernobyl and Fukushima, but who's ever heard of the Majak nuclear power plant? The film is shot in beautiful black and white images, which contrast the radioactively contaminated countryside. In a positive sense, Sebastian Mez makes us aware of the beauty of impermanence and at the same helps us to remember a forgotten region and history.

Like Die mit dem Bauch tanzen, Einzelkämpfer is a very personal film, at times accompanied by the filmmaker's voice-over. The director Sandra Kaudelka was a professional athlete in the GDR herself. She never wanted to attend a sports school, she never wanted to be subjected to the drilling, but to her “misfortune”, she was very talented. Now she looks up four athletes who were very successful at the time and sheds light on their memories and assessments from the point of today and compares their experiences. 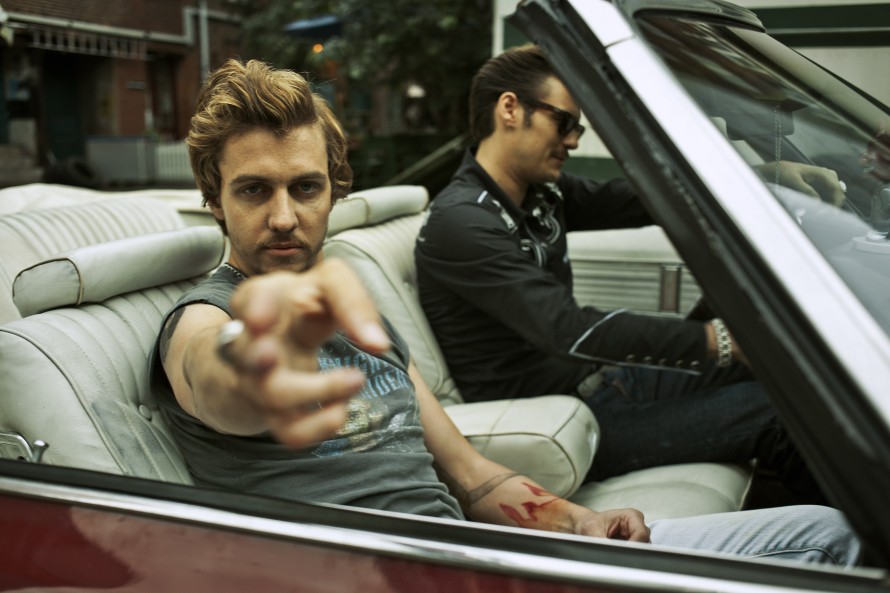 Niklas Kohrt and Tilman Strauß in DeAD by Sven Halfar

Fruitful Support of the Next Generation

Annekatrin Hendel won last year's “Made in Germany - Perspektive Fellowship”. What has become of her project?

The script of the documentary project Disko on the bombing of the La Belle nightclub in Berlin-Schöneberg, in which three people lost their lives in 1986, is now finished and the project is currently in the financing stage. Shooting is planned for early 2014. This year the award will once again be sponsored by Glashütte Original and comes with a 15,000 euro stipend. All directors of the last Perspektive were eligible to submit a treatment. The winner will be announced at the opening of Perspektive Deutsches Kino.

With Hans-Christian Schmid, Nicolette Krebitz and Heino Deckert, you've managed to put together a very strong, celebrity jury for 2013. Does this mean the award has been well-received and become established?

Absolutely! It's really a very good way of fostering young talent. After a film has been shown in Perspektive, we don't just let the directors run away. We try to motivate them to continue working and develop another script. The winners receive a script stipend as well as dramaturgical advice. We also help them look for financial backers and then hope that the finished film is good enough to run in one of the other Berlinale sections...

Two events in this year's “Made in Germany – Talking about Film” discussion series also address the issue of film financing. Half of the films in this year's programme were produced independently or by small production companies. The directors of Silvi, Endzeit and DeAD even indirectly self-financed their films.

But that's not all. Together with the Franco-German Youth Office, we're hosting a workshop discussion on the theme “Tradition and Resistance”. We're expecting the guests Volker Schlöndorff, Bruno Dumont, Emily Atef and Pia Marais. Unfortunately all talks are in German only.