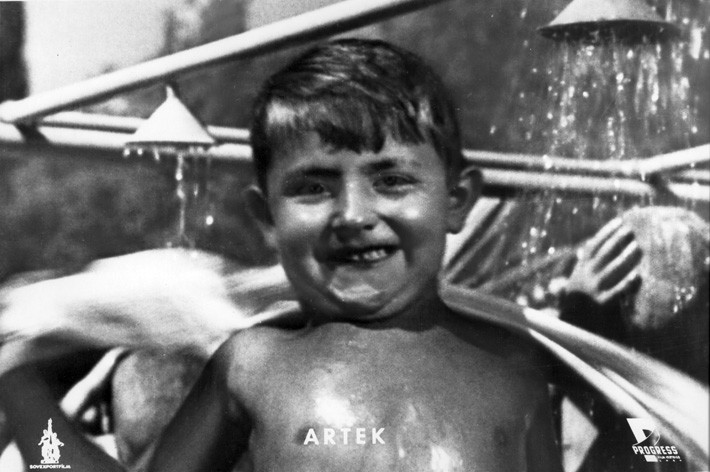 Source: Bundesarchiv, FilmSg 1, 0841_03
Anyone admitted to Artek is already something of a hero. The vacancies are highly coveted in this socialist paradise: a holiday camp for the Soviet Union's Young Pioneers, paradisiacally situated on the southern coast of the Crimea. Only the most highly committed and convinced pioneers are allowed – as a reward for their efforts – to spend their holidays there. Early-morning sports, the daily flag ceremony, excursions, swimming, playing games and reserve-duty training exercises await them – along with lots of music and the special Artek song. In the evenings, by the camp fire, the leader tells the children anecdotes about his experiences with famous party leaders during the Civil War. And Stalin is ever present at Artek, too: both in pictures and in the Pioneers' oaths. The sun, the sea and a Communist education thereby ensure a supply of new, healthy, sun-tanned recruits, who are full of conviction and ready to serve as leaders later on.
The only surviving copy of this early sound documentary film is a rarity; it is also one of the very last films that the studio was allowed to produce. Unlike most of the early Mezhrabpom documentaries, this one is completely imbued with the spirit of the Stalin cult. It becomes apparent, in the most alarming way, how cunningly and profoundly the process of brainwashing was applied already to these young Soviet citizens.