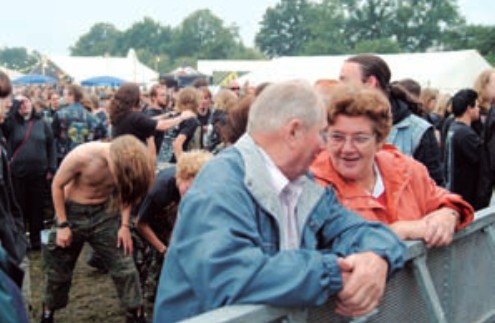 The cultural divide between the good folks of Wacken in Schleswig-Holstein and the heavy metal fans who have descended on their quiet community from all over the world could hardly be greater. Starched blouses, golden crucifixes and dark suits meet studded collars, tattoos and shoulder-length hair. The Wacken Open Air line-up of bands says it all: Cannibal Corpse, Grave Digger, Testament, ween thRaise Hell, Death Angel, Sodom. Wacken has become a place of pilgrimage for 40,000 heavy metal fans. And the folks of Wacken are proud that their village is the spiritual centre of the world - at least for some people. The heavy metal festival has become a firm fixture in the identity of this rural community. At the same time, Wacken seems to be undergoing a fundamental change - from the restructuring of the unprofitable dairy industry to a new definition of their centuries-old rural identity. Perhaps that's what farmer Trede means when he says: "It's more profitable to milk people than cows."
Sung-Hyung's work is in many ways a film about otherness, about strangers trying to bridge the gap that exists betem. An affectionate documentary about an ordinary small town in Germany, that is also a portrait of a unique music festival and the people who make it possible.